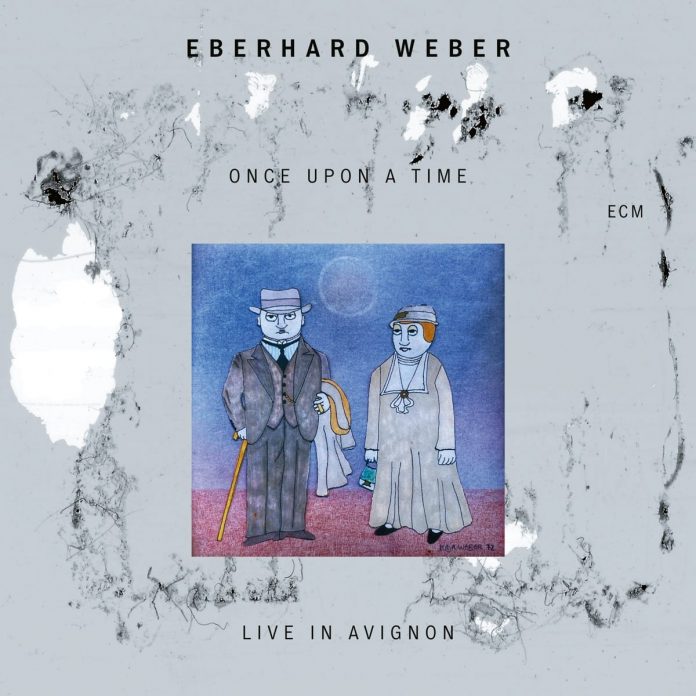 From the Weber enthusiast’s point of view, at least, life after the April 2007 stroke which ended the bassist’s distinguished playing career has not been as impoverished as one might have feared. There have been three soulful, intelligently conceived and well-received albums of what one might call “meta- music”: the intimately cast Résumé (2012) and Encore (2015), followed by the full-on Stuttgart concert recording – with, a.o., Gary Burton, Pat Metheny and Dan Gottlieb – that is Hommage (2015).

The recent English language edition of A German Jazz Story, Weber’s excellent autobiography, was reviewed in November. And now ECM have dug into their vaults to come up with Once Upon A Time. Graced – as with the vast majority of Weber’s previous releases on ECM – with cover art from his (late) wife Maja, this solo concert recording from summer 1994 chiefly reprises material from two Weber albums, the 1988 Orchestra and the 1993 Pendulum.

Jan Garbarek once characterised Weber as “not a bass player in any traditional sense, but a musician who just happens to play the bass – which he does in all kinds of fresh and wonderful ways”. Weber himself has volunteered that he was never a fan of the conventional idea of a bass solo, preferring to develop an aesthetic where factors of dynamics, of tenderness – even silence – could have their due place. Once Upon A Time offers a cornucopia of all such, with Weber’s special sound and consummate command of intonation, dynamics and various digital means evident throughout.

The sleeve track details say that the first piece here is the title number from Weber’s all-solo Pendulum. But it is not. The programme begins, rather, with Seven Movements from Orchestra – an album where Weber employed a medium-sized brass ensemble on two tracks in what was otherwise a solo endeavour. One of these tracks was Seven Movements: it is a most welcome bonus to be able to experience the piece as it appears here, rendered unadorned in a boldly cast range of reflective yet resonant register, rhythmic accent and dynamics.

Ready Out There – the question mark dropped from the title as it featured on Orchestra ­ – was always a crowd-pleaser, the chop-handed “European funk” of this thoroughly entertaining piece sometimes bringing Weber as close as he ever came to showboating, as in the super-charged coda here. In contrast, Air – again from Orchestra – epitomises Weber’s unforced command of etched melodic phrase, projecting that poetics of space, tenderness and yearning which he long made his own.

It is good to hear live versions of such contrasting pieces, together with the compelling arco-led poetry of Silent For A While and the pizzicato exhilaration of Delirium, both from Pendulum. And it is fascinating to hear Weber’s lengthy, loop-underpinned development of the intriguingly titled reflections which constitute Trio For Bassoon And Bass – a piece he had previously never recorded.

For me, however, the chief of the many joys of Once Upon A Time lies in the opportunity it affords to hear Weber stretch out and swing quite irresistibly during his six-minute, multi-hued take on My Favorite Things. In all the many solo Weber concerts I was lucky enough to catch I never once heard him play this waltz-sprung piece, so long associated with Coltrane. It’s rapidly become one of my favourite Weber cuts.

Would it be too much to ask that ECM might now consider releasing what for many has long been an inexplicably overdue item: namely, a concert recording of the Jan Garbarek Group with Weber on board? In the meantime, don’t miss this thoroughly captivating example of solo Weber at his inimitable best.