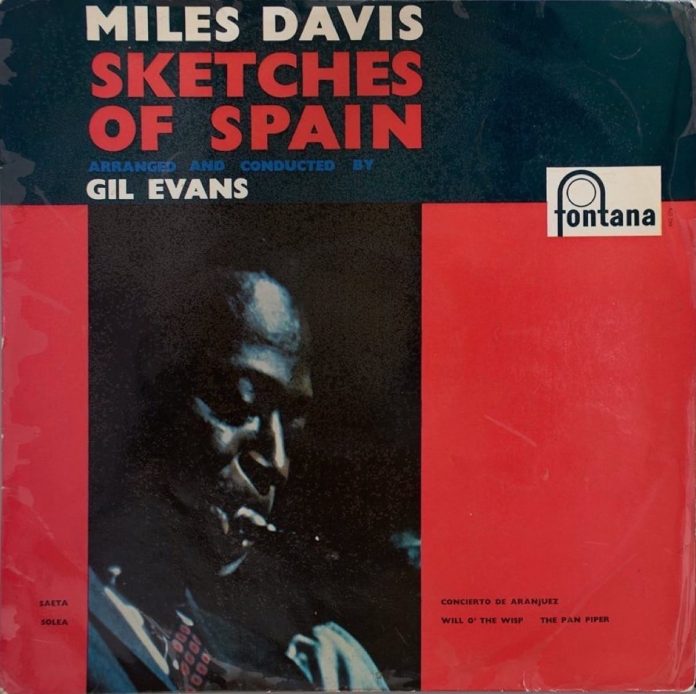 This is a beautiful record. For their third Fontana collaboration, Davis and Evans have used as a basis various pieces of Spanish music. “Concierto de Aranjuez” was composed for guitar and orchestra by the contemporary Spanish composer Joaquin Rodrigo; Evans has re-written and extended the middle section. “Will O’ The Wisp” is an ex­cerpt from Manuel de Falla’s ballet “El Amor Brujo”; “Pan Piper” is a folk tune; whilst the two remaining pieces are derived from the flamenco.

One of the most remarkable things about this record is the range of emotion encompassed by Miles Davis. His playing on “Saeta” (meaning “Heart pierced by grief”) is perhaps the best thing he has ever done. On “Concierto de Aranjuez”, his lower register playing is beautiful, with a big full tone. “Solea” might be described as a Spanish blues (in meaning rather than form), and is the only track with a strongly rhyth­mic basis. As Nat Hentoff says in his excellent liner notes: “It is a measure of Miles’ stature as a musician and a human being that he can absorb the language of another culture, that he can express through it a universal emotion with an authenticity that is neither strained nor condescending.”

Each new collaboration between Davis and Evans brings forth fresh facets of the remarkable genius of both men, and none more so than Evans’ work on this. One has come to expect certain sounds from Evans – “Porgy & Bess” contained some familiar ones and some unfamiliar. Throughout this album it is all un­familiar, which is a remarkable tribute to the arranger’s continued and con­tinuous inventiveness. His is more than a remarkable talent – a genius for find­ing new and felicitous blends of in­strumental voicings.

Much of the music on this album is out of tempo; the parts in tempo aren’t in 4/4 time, and yet there are no awkward moments. There may be complaints that the music doesn’t swing enough, but I think there is room in the world of orchestral jazz for a Gil Evans as well as a Count Basie. This is an achievement by Davis and Evans which even they will find very hard to surpass.

Nic Jones - 13 January 2022
Fresh Sound's "The Best Voices That Time Forgot" series is a fine example of hype-free billing, the kind of billing disregarded by the often excitable types who write press...