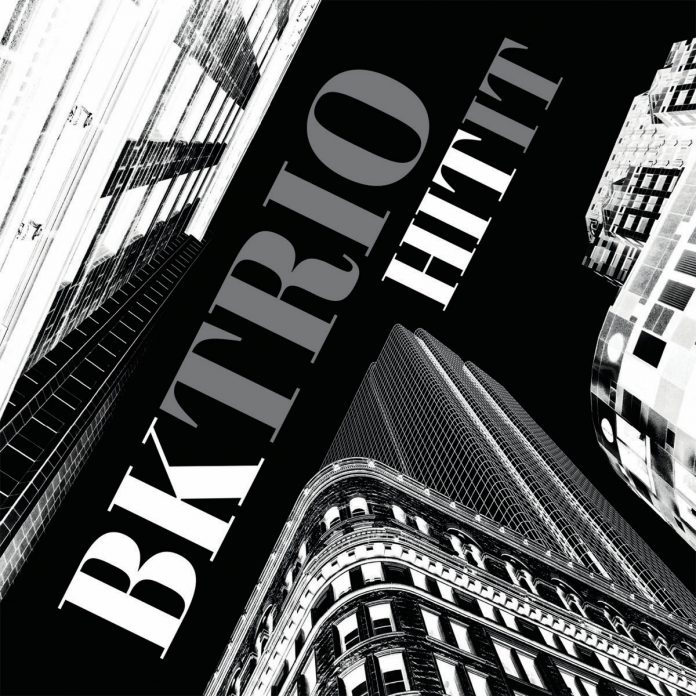 Even if the contemporary infrastructure of the organ combo business is a fraction of what it used to be in the halcyon days, there is still plenty of competition in the field, which by nature is tending to attract folks that love soulful music and are willing to spend their pay check to come down and hear it after a week of hard labour.

As a soul and organ jazz act, you better have something going for yourself. The BK Trio of guitarist Brian Kooken, organist Greg Hatza and drummer Robert Shahid definitely has enough going for it, primarily the contrast between Kooken’s acerbic and enthusiastic phrasing and Hatza’s lively and balanced statements and accompaniment on the Hammond organ.

The repertory of its debut album Hit It!, written exclusively by Kooken, consists of simple, blues-based vehicles for blowing at pretty much all tempi available, which are laid down sturdily but without punch by Shahid, not the first and most likely not the last player in the digital era who suffers from sterile engineering.

Brazilian Blues is the most interesting composition and Kooken’s beautifully formed, extended melody line is the record’s highlight as far as lyricism is concerned. Kooken’s warm and fat tone is reminiscent of Pat Martino and his angular flights across the bar lines, albeit uneven at times, are praiseworthy. He is a blues player at heart, and a fiery one at that.

Hatza is a veteran organist who first made his mark in the late 60s with The Wizardy Of Greg Hatza and Organized Jazz, both accompanied by drummer Grady Tate. His career followed a rather outlandish course. In the early 70s Hatza switched from organ to hardcore bebop piano jazz and subsequently dived into electric keyboard-infused fusion. Meanwhile, the Pennsylvania-born musician had schooled himself as a sitar, tabla and ehru (Chinese fiddle) player, while honing his chops as a certified master of martial arts.

In short, he could Ravi the hell out of Shankar and hold Jimmy Smith suspended in the air on the tip of his index finger. The resurgence of organ jazz in the mid-90s in the slipstream of Joey DeFrancesco’s popularity inspired Hatza to put renewed energy into the B3 organ. His sustained groove and tasteful linear development underlines Hit It!’s relevancy as a contemporary organ combo affair.

The Eric Ineke JazzXPress: What Kinda Bird Is This?

Mike Casey releases his latest album, a contemporary mixture influenced by both traditional jazz as well as modern pop and hip-hop. Recorded with his...

In memory of the outstanding Camerounian composer and saxophonist Manu Dibango, who died 24 March 2020 aged 86 following treatment for COVID-19, here's a...

Reviewing Maria Farantouri's and Cihan Turkoglu's Beyond The Borders (2017) this October, John Adcock spoke of “the broad church of the ECM catalogue”. Some...

Herbie Hancock's excellent series of Blue Note albums continues with The Prisoner, where he has chosen to write for a nine- or eleven-piece group....