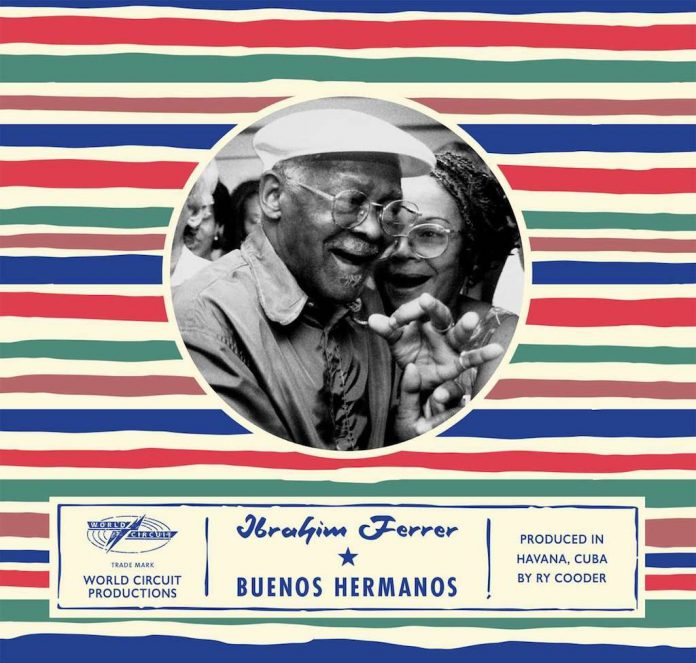 Having retired from almost 40 years of performing, Ibrahim Ferrer was shining shoes in 1996 before being approached by Afro-Cuban All Stars’ band leader, Juan de Marcos González. Ferrer then sang on the sessions that would become the original Buena Vista Social Club album, which sold more than eight million copies and catapulted Ferrer to international fame.

Buenos Hermanos was originally released in 2003 prior to Ferrer’s first solo album, Buena Vista Social Club Presents Ibrahim Ferrer. Acclaimed for firmly rooting itself within the Cuban tradition, this album sought the horizons of 21st century sounds and modernity leading to the success of a Grammy as Best Traditional Tropical Latin Album.

Almost two decades later, slide-guitar specialist and film composer Ry Cooder has returned to the original tapes to remix them as well as include four unheard tracks from the sessions.

When asked about Buenos Hermanos reimagined, Cooder said “We went back into the session tapes and found songs that were overlooked for some reason, and you’re going to be as thrilled as I am. We’ve really polished it up and improved it and expanded it, it sounds almost brand new. There’s one thing for sure: we need something good, something beautiful in these days and times”.

The highlights which previously were unheard include Ojos Malvados. A composition by Cristina Saladrigas which translates to Evil Eyes, this is a dignified bolero which has become part of the repertoire amongst the most prestigious Cuban musicians including Trio Matamoros and Barbarito Díez.

Cooder’s impressive capture of Ferrer’s voice has lifted the tradition of Cuban music into a new age for all to experience.

Elliot Marlow-Stevens - 05 April 2020
John Stein has accomplished a great deal as a guitarist, with a lengthy list of album releases, a career teaching at the Berklee College of Music, and sessions the...