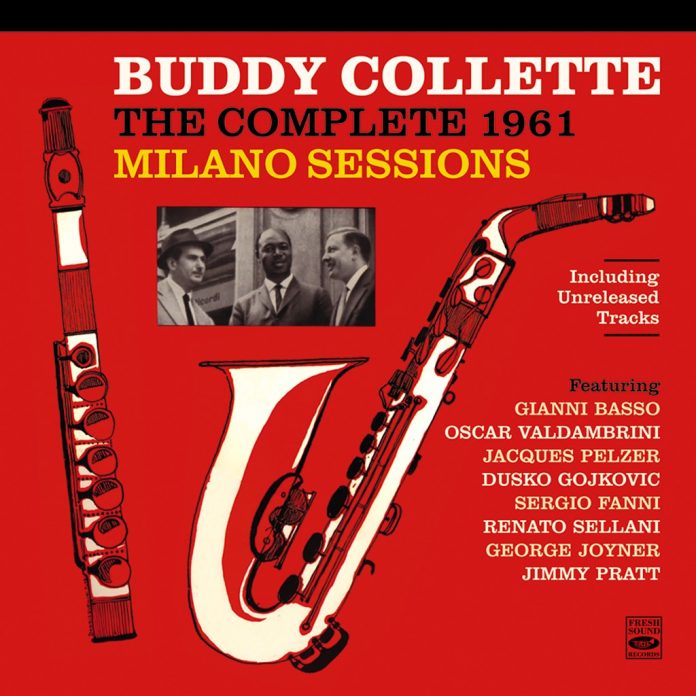 Buddy Collette deserves greater recognition. That he hasn’t had it is probably because he fell off the radar slightly for some years during the 60s and also he was seen as a multi-instrumentalist, rather than a specialist. Unfairly so, as these recordings show.

A leading light in post-war West Coast Jazz, playing with Mingus, Benny Carter, Gerald Wilson and others, he came to prominence with Chico Hamilton in the mid 50s. In 1961 he went to Italy to appear at the Sanremo Jazz Festival, stayed several weeks and recorded with top European players.

This set is well arranged, chronologically, starting with Slavic Mood, an attractive number by Serbian Dusko Gojkovic, with the composer playing tightly muted trumpet and Collette joining on flute. Several Collette originals follow, including the atmospheric Pickford Street (Sellani’s piano quietly understated) and the ballad Paddi (the leader on alto), before the Dennis/Adair standard Everything Happens To Me. Gojkovic excels on these, both muted and open, romping through A Taste Of Fresh Air, Collette’s alto in close attendance.

This album is worth getting for these sides alone, but there’s more to follow, as the solos from Valdambrini, Basso and Collette on Inverness, Santa Tecla and Buddy Boo demonstrate. Basso tips a (pork-pie?) hat to Lester Young on I Forgot, and follows Sellani’s block-chord and single-note run on Miss Helen with strong-toned tenor.

American bassist George Joyner (Jamil Nasser) gives rhythmic guidance throughout, but notably on Skater For Mater, Blues and Speak Low. His walking bass directs Softly, in which the quality of playing shines through from Sellani and Collette, and he duets with the leader on a sensitive reading of That’s All, piano and brushes joining.

There’s plenty for flute fans when Collette and Pelzer combine and there are four tracks with La Scala String Quartet – an acquired taste but it conjures up Italy of that period, Antonioni and Monica Vitti wandering into Milan’s Jamaica bar. There are even a couple of Latin numbers – conga drum and bongos with Dino Piana’s lively trombone. All very enjoyable with some gems.

In an interview in the booklet Collette said “What a great, great trip it was. It was all music for a month, me learning the different pacing of the Italian people and the musicians”. Poignant, in the current climate of uncertainty. All hopes for a return to safety, borders reopened and links with a warm and friendly people soon re-established. [If Brexit catches Covid-19 – Ed.]