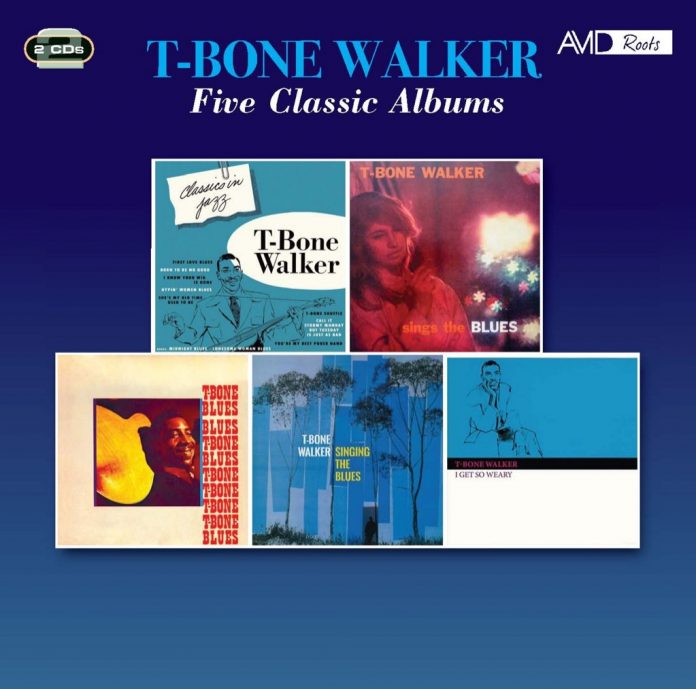 Walker has his place in the history books as one of the forefathers of jump blues and electric R&B – a long way away from his days as a guide/pupil of Blind Lemon Jefferson, as influential a figure as T-Bone.

Classics In Jazz was released in 1953, I Get So Weary in 1961, whilst the other three albums saw the light of day in 1959. Avid have chosen to print release dates in the accompanying booklet rather than recording data, which remains very sketchy. Although personnel line-ups are also included for each album these are similarly unreliable hence unidentified musicians are clearly to be a heard on a couple of tracks.

By the time all this music arrived on disc Walker had become an established figure, with many electric guitarists subscribing to many of his licks and figures, which on a personal front had become well-worn clichés; many are in evidence over the course of these 55 tracks. Interestingly, there are a few tunes sporting musical phrases that became synonymous with Chuck Berry, begging the question “Who stole from whom?”

It has to be said there is a similarity about much of the material, all of course set into a jump or R&B mould; many of the tunes follow a similar pattern, i.e., guitar solo followed by vocal. T-Bone is in good voice, apart from on a couple of ballad-like numbers where he sounds less assured. Needless to say his guitar work has that instantly recognisable resonance about it.

There are others soloists to enjoy such as Plas Johnson, Eddie “Lockjaw” Davis and briefly an audibly unrecognisable Barney Kessel, illustrating T-Bone’s long association with jazzmen that would continue for many years after these recordings.

Ian Lomax - 27 January 2022
This is guitarist Obiedo's second album of jazz tinged with the colours and rhythms of Latin music. It comprises 10 original compositions by Obiedo and one jazz standard. All...