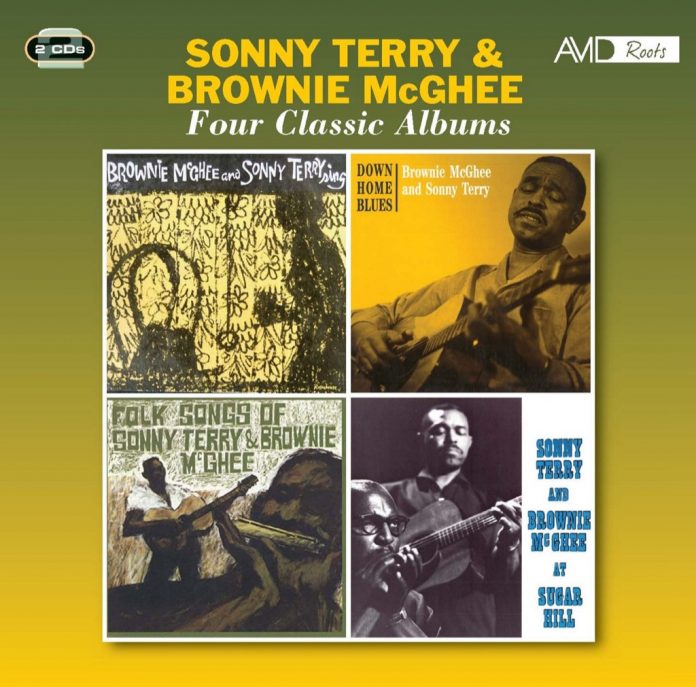 One of the best-known and most stylish blues duos of all, Sonny Terry and Brownie McGhee get a deserved Avid Roots release for four of their albums, recorded between 1958 and 1961. The two men, born in 1911 and 1914 respectively, are skilful musicians and vocalists, with an easily-accessible style and a stricter approach to rhythm and tempo than some solo artists, such as John Lee Hooker or Lightnin’ Hopkins. The result is music that’s immediately engaging, but without the twists and turns that characterise some of the more idiosyncratic blues artists, although Terry’s whoops and cries can surprise.

The various track listings give Terry and/or McGhee songwriting credits for almost all of the songs but like many blues numbers their origins are older and it may be more accurate to credit them as arrangers rather than composers – Southern Train bears a very close resemblance to Junior Parker’s Mystery Train (which has similarities to the Carter Family’s Worried Man Blues), Climbing On Top Of The Hill is the twin brother of Howlin’ Wolf’s Sitting On Top Of The World and bears a striking resemblance to Better Day, which opens Sing. The pair are also credited with writing John Henry, even though the original sleeve notes discuss the 1920s and 30s versions of the song, and skiffle favourite Freight Train (acknowledged as Elizabeth Cotten’s composition).

Sing and Down Home Blues are, in fact, partly trio sets, with drummer Gene Moore keeping time on a selection of tracks. Pianist Dave Lee adds some keyboard magic to three of the songs on Folk Songs Of Sonny Terry & Brownie McGhee, often concentrating on the upper and lower registers of the piano while Terry and McGhee occupy the midrange. The album gets off to a rip-roaring start with I Love You Baby, the trio delivering the song with more energy than many electric trios could muster, then shifts down a gear for the slow tempo shuffle of Corn Bread, Peas And Black Molasses. So the only fully duo album is At Sugar Hill, recorded at the San Francisco nightclub of the same name. It’s a lively and well-recorded set, Terry and McGhee relishing the club atmosphere and giving an impressive performance.

John White - 27 November 2020
As almost everyone agrees, Ellington’s appearance at the 1956 Newport Jazz Festival reignited his faltering career, thanks largely, if questionably, to the marathon 27-chorus tenor solo by Paul Gonsalves...