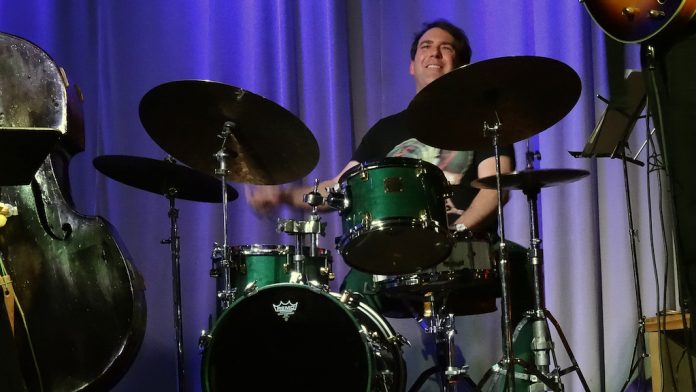 Drummer Jason Harnell has been a renowned fixture on the Californian jazz scene for over 30 years, playing in a variety of contexts, not least contemporary straightahead, as YouTube clips such as this with Ben Monder attest in grand style.

But his new album Total Harnage marks a departure as he branches out into experimental, multi-media territory. In what is a richly embellished solo album he takes the drum solo as the basis for new adventures, incorporating a polyrhythmic homage to Indian tabla master Zakir Hussain along with inspirations from classic films, superheroes, classical music, ambient electronica and abstract art.

That might sound like a recipe for a solemn exposition of artistic diversity, but Harnell brings a comedic touch to the project, saying “I prefer sincere to serious”. The result is a joyfully schizophrenic collection of his favourite pieces from the wealth of material he has amassed during his live solo drum performances.

Reflective of its unique creative vibe and audio-visual presentation, Total Harnage is being sold via Jason’s website in two different formats – LP (he says so that the colourful album artwork can “pop” better) and as a USB flash drive shaped like a cassette that contains the music and all of the accompanying videos (several are already up on YouTube). To hear the music on LP and USB flash drive go to jasonharnell.com or to stream go to jasonharnell.hearnow.com.

This article was prepared with the assistance of the artist.

Jazz FM invites musicians to be ‘guest Head of Music’

Simon Adams - 14 May 2020
In 1996 American pianist Geri Allen became the first female winner of the prestigious Danish Jazzpar Prize. A requirement of the prize was for the artist to perform in...