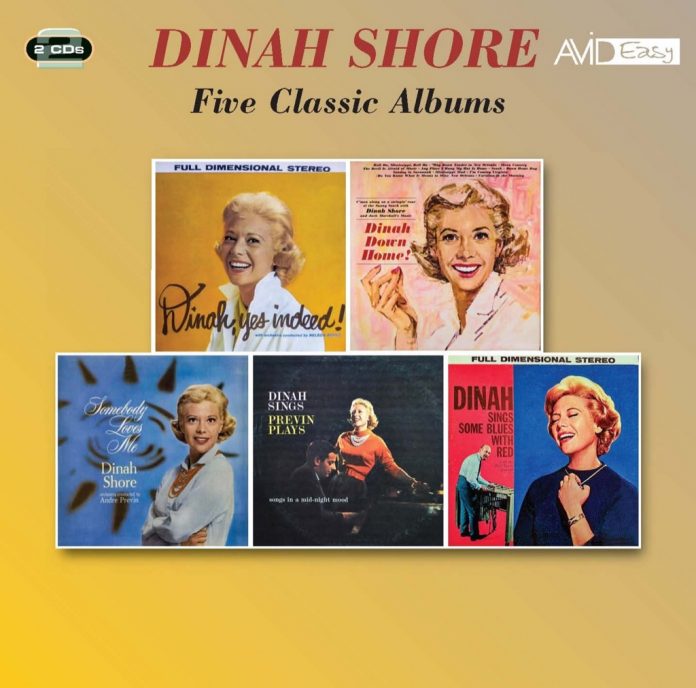 First off, apologies for the minimal discography: life is too short to type out all 53 track titles, most of which contains the words “You” or “Love”, so album titles only for this review. Check out Avid’s page if you want a full list. As for Dinah Shore herself, for those who have not yet met her, she became the first singer of the big band era to achieve solo success, having previously failed auditions for Benny Goodman and both Dorsey brothers bands. She had 80 chart hits from 1940 to 1957 and, with a few films to her name, enjoyed a four-decade career in television, including hosting variety programmes for Chevrolet and some talks shows.

Stylistically, Shore is often compared to two singers who followed her: Doris Day and Patti Page. Her voice was smooth and sometimes suitably languid, her delivery natural, never forcing a note or pushing a beat too hard. Give her a good song and a sympathetic background, and off she sailed with effortless ease.

Shore recorded her first album for RCA in 1941, and eventually migrated to Capitol in 1959. This double-CD set collects her first five recordings for that famous label. As you would expect from Capitol, the three orchestrated sets here are fine and plush. Her Capitol debut, Dinah, Yes Indeed! from 1959, was orchestrated by Nelson Riddle, and there is not a note out of place, a misplaced emphasis or an overly strident line. The One I Love Belongs To Someone Else is light as a feather, the brass and woodwind responses keeping the whole song aloft, Sentimental Journey replete with subtle surprises. With Riddle, you always expect class, and this set does not disappoint.

Dinah, Down Home, from 1962, pairs her with arranger Jack Marshall in a set of easy-swinging Dixieland tunes and mellow Southern blues. In comparison with the Riddle set, it is unsubtle, largely because the material – Way Down Yonder, Do You Know What It Means To Miss New Orleans, etc – is all too familiar, although the achingly slow Any Place I Hang My Hat Is Home, a lesser known Arlen and Mercer composition, and one recently performed by Beyoncé in 2008, is richly atmospheric.

No such reservations for Somebody Loves Me from 1959, arranged and orchestrated by the 30-year-old André Previn. Previn rises to the occasion superbly, delivering a sweeping, romantic sound with a large string section blended with the soft, reedy tones of a woodwind choir. The tracks are all sentimental favourites, Shore’s delivery pitch perfect, and while some might find it all a bit sickly, this set is very much a late-night classic, and all the better for it.

The final two sets are quite different in style. The self-explanatory Dinah Sings, Previn Plays from 1959-60 was an impromptu, studio-lights-down-low type of recording, the songs chosen on the spot to fit the mood, a basic rhythm section used only where appropriate, and no arrangements pre-organised. It is in a setting like this that one can appreciate Shore’s concern for the lyrics, her personal, intimate approach to each song. Previn’s piano is quietly, achingly hip, inventive and ingenious in every note he plays, Mitchell and Capp suitably supportive.

Finally, Shore’s 1959 set with Red Norvo – and why aren’t these five sets organized chronologically on this double CD set, by the way? It’s a curiously understated outing, oddly thin in its arrangements and sometimes lacking the easy swing one associates with Norvo. Even Shore sounds forced in places. But, as with Previn, it is here that one can properly hear Shore the singer.

By the way, Dinah was born Frances or Fannye Rose Shore in 1916 and only took her stage name after she sang the popular song Dinah in New York c.1939 as an audition for DJ Martin Block at WNEW, who promptly forgot her name and called her the “Dinah girl”. The new moniker stuck and soon became her stage name. But did she not ever roll her new name round her tongue a little bit to try it out? She soon would have discovered that she has remained forever a dinashore, albeit a sweet voiced one and never a gruff T Rex.