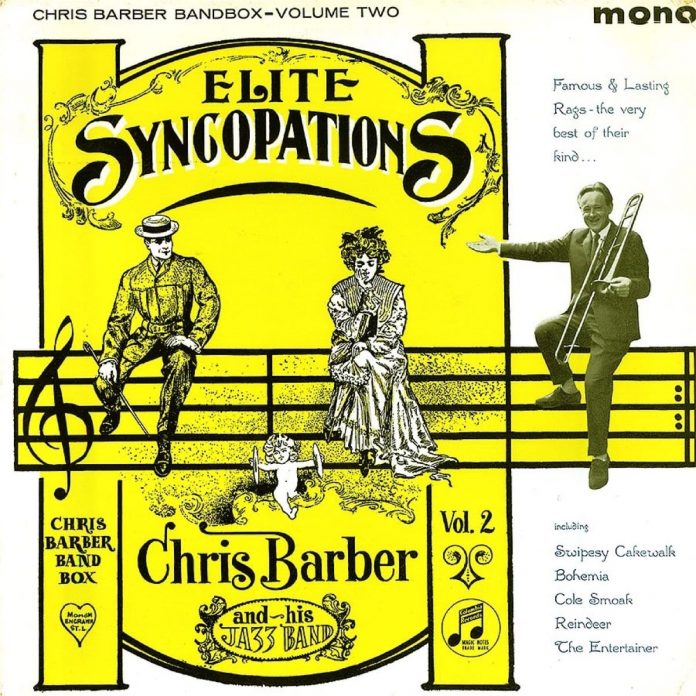 Chris Barber is a jazz musician who has long shown commendable enterprise in his imaginative use of the traditional style. This has been evident from the early “Plays Spencer Williams” LP right up to the recent and successful intro­duction of rhythm-and-blues numbers into the band’s repertoire.

His latest venture is this album of band ragtime, adapted by Chris from the New Orleans Red-Backed Book of Rags and from sheet music supplied by Bill Russell.

On the whole the undertaking is a success, but not an unquali­fied one. Ragtime demands a light, cor­rect and crisp beat and the Barber rhythm is just not up to the job. At times (“Swipesy”, “Georgia Camp”, “Bohemia”) they play well enough, with the banjo properly light and/or sub­dued, but elsewhere the beat becomes noticeably heavy. Eddie Smith’s banjo is, at best, a bearable noise, and Graham Burbidge’s swing-cymbals sound out of place in this setting – rag­time is snare-drum music if ever there was. However, rag tempos do make for relaxation, and the front line play well, with only minor fluffs on arrangements that could not have been easy to navi­gate – I like particularly the exchanges and unisons between Pat and Monty on “The Favourite’.

Unexpectedly, among the most satisfying tracks are those on which Chris accompanies himself by means of multi-track recording, but these are more jazz-like performances than the others. The best of the band numbers are “The Peach”, “The Enter­tainer” and “St. George’s” – light, ele­gant, pretty performances which come close to capturing the essence of rag­time music. “Georgia Camp” is mainly notable for Dick Smith’s bass, pumping away as if, after all these years, he had suddenly lost control. It should happen more often.

Of course, the listener’s reaction largely depends on whether or not he likes rag­time, a music which, correctly played, is a far cry from the surging swing of jazz. Personally, I’m a hot man and no great lover of the idiom. For this reason, I can only vouch that this is a thoroughly pleasant (in the best sense of the word) record.