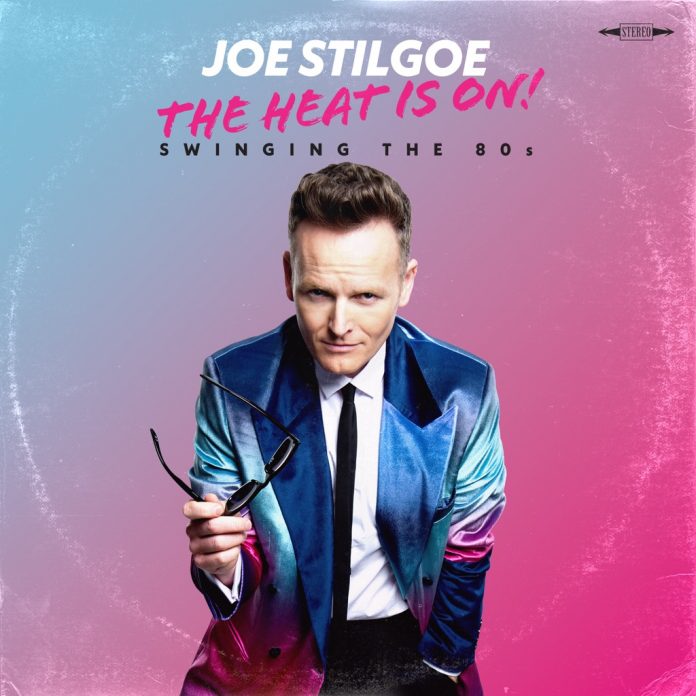 Not having heard – or even heard of – vocalist and pianist Joe Stilgoe, I did some preliminary research before listening to this CD. He was born in 1979 in Sevenoaks Kent, the son of musician, lyricist and broadcaster Sir Richard Stilgoe and opera singer Annabel Hunt, and had an early fascination with a wholesome America as depicted in its movies.

After studying music at the University of Southampton and Trinity College of Music, he released a debut album I Like This One (2008) followed by We Look To The Stars (2012) and Songs On Film (2014). All were well received, as were his performances at Birdland, the Albert Hall and most recently, with his Mighty Big Band at Ronnie Scott’s.

As a vocalist, Stilgoe has a pleasing mid-Atlantic accent and a sure sense of swing and rhythm. One of his prime influences has been Harry Connick Jr.; the others are Nat King Cole, Dudley Moore and (surprisingly) Danny Kaye.

The Heat Is On! presents pairings of 1980s movie song hits with 1950s-type arrangements in the styles of Leonard Bernstein (West Side Story), Nelson Riddle, Billy May and Johnny Mandel by Stilgoe’s close associate Evan Jolly, who also conducts. The films in question include Beverly Hills Cop, Back To The Future, When The Going Gets Tough, The Flintstones, The Karate Kid and Bill And Ted’s Excellent Adventure. Unfortunately, few of the 12 songs merit the care and skills that are expended on them. Prime examples are Walk The Dinosaur (The Flintstones), In Your Eyes (Say Anything) and Come And Follow Me (Short Circuit).

Despite the undistinguished material, Stilgoe manages to invest the title (and the best) track (from Beverly Hills Cop), Back In Time (Back To The Future) and St. Elmo’s Fire (from the eponymous film) with jazz- and swing-inflected nuances. On two tracks – Partyman and Rhythm Is Gonna Get You – he also plays commendable piano.

Outstanding ensemble work (try the rocking Hungry Heart from Kinky Business), plus featured soloists Martin Williams (tenor), Gemma Moore (baritone), Calum Au and Jon Stokes (trombones) and Simon Gardner (trumpet) lift the proceedings to a high level, but the strings and French horns on In Your Eyes (Say Anything) are perhaps surplus to requirements.

A jazz-lite but enjoyable album (with humorous and informative notes by Stilgoe himself) which showcases his impressive vocal talents. It’s a pity they were not expended on better movie-derived material.

Click here to buy Joe Stilgoe: The Heat Is On! Swinging The 80s

Jazz Journal - 30 March 2022
The Promenaders are a seven-piece band including tuba, cello, guitar, drums and two cigar-box violins; Coxhill fronts the band on soprano sax and takes the role of emcee. The...