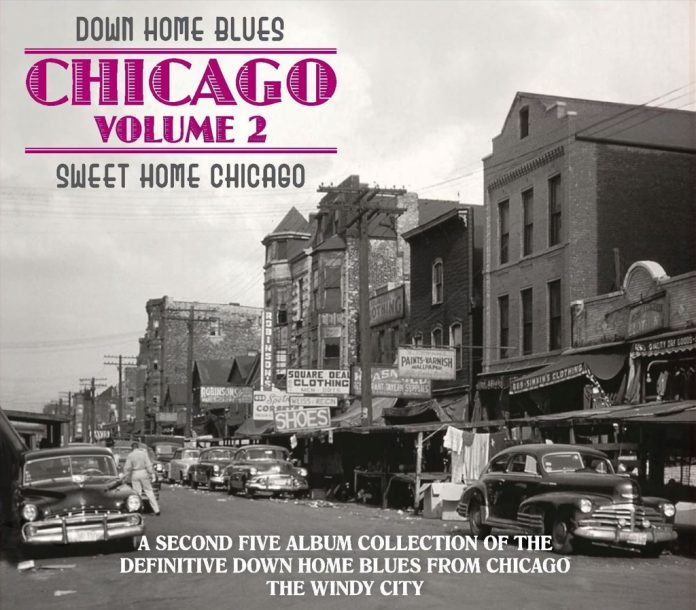 This box set of five CDs follows up Wienerworld’s first Chicago collection – Fine Boogy. It’s the fourth set in their Down Home Blues series which explores the different regions of the black American post-war blues scene. The other two collections cover Detroit and the North Eastern States with the latter taking in New York and Cincinnati.

The mass migration of black Americans from the southern states into Chicago after the Great Depression and Second World War brought with it blues musicians from the Delta. Their music became adapted to the city’s urban environment and blues lyrics took up urban themes. The solo bluesman was joined by a pianist or harmonica player and then by a bass and drums rhythm section. Electric guitar and amplified harmonica followed. These musicians would often start out in Chicago’s Maxwell Street open air market, play at Chicago house parties and then eventually make their way into the city’s blues clubs.

Alongside existing recording companies like Columbia and Paramount, small independent labels such as Chess, Vee-Jay, Marjette and Aladdin sprang up to service the fast growing taste for the new blues. Blues artists recorded by these labels from 1945 to 1962 are presented here with many for the first time.

The collection provides a mix of well-known, lesser-known and obscure musicians. Tracks by those who have since become big names such as Little Walter, Sonny Boy Williamson and Muddy Waters are either alternate takes or have been previously unissued. All the tracks have been digitally remastered. The odd early one has some minor scratchiness but that’s always part of the deal when they’ve been recorded so long ago.

This neat fold-out box set has more than six hours of music and comes with a fascinating 94-page booklet. It has essays on each of the performers, rare period photos, full track details, a sessionography listing who is playing each instrument, pictures of the original labels and a useful index. As expected from Wienerworld it’s a high-quality production.

Steve Voce - 26 August 2019
For me the first three tracks deserve the same number of stars as Jesus Christ. The fourth is close to that but the other seven, including a painful two-minute...