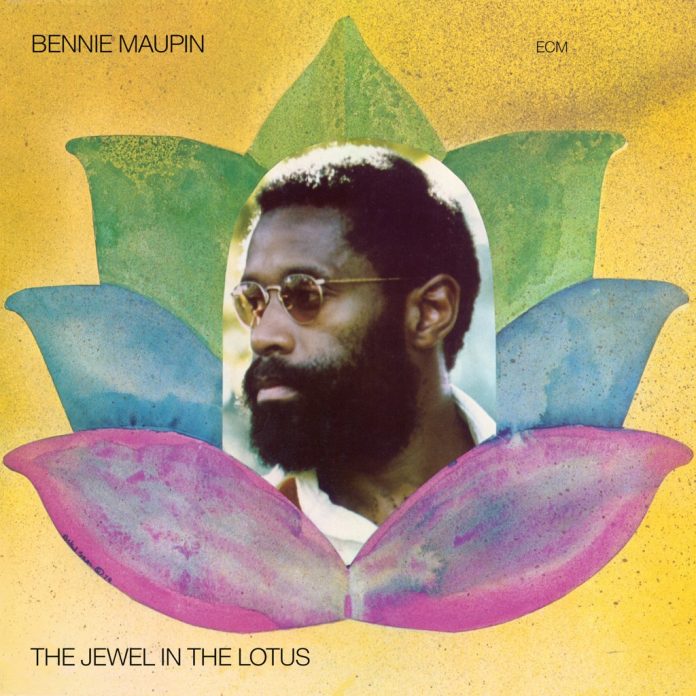 Bennie Maupin is probably best known for his association with Miles Davis on Bitches Brew and Herbie Hancock’s Mwandishi and Head Hunters. The Jewel In The Lotus, recorded in 1974, was Maupin’s debut album as leader. ECM reissued it as as a CD in 2007 and again now.

Buster Williams, the album’s bassist, had inspired Maupin to explore Buddism and along with Hancock the three became lifelong adherents. The title of the album is a translation of the Buddhist chant “Om Mani Padme Hum”. It centres on the notion that a lotus flower, with its ability to grow without roots from the murkiest of waters, can reveal the jewel of the true nature of being. Accordingly, all the songs in the album relate to the primary concerns of our journey and transformation in life – with the exception, it seems, of Song for Tracie Dixon Summers.

The journey begins with Ensenada’s opening seconds of silence heralding Williams’s two-note bass drone. Maupin delivers single flute notes and is joined by tinkling bells and marimba. Hancock adds mysterious piano. Mappo, a word deriving from Nichiren Buddhism, refers to the present moment. The track introduces Sullivan on trumpet and contains the nearest thing to a jazz piano solo on the album. Excursion is intense and we hear Maupin chanting. It’s one of the few tracks on the album that features his bass clarinet. Past + Present = Future is a short ostinato with transitory flute.

The 10-minute title track has Maupin soloing on soprano sax but again he rarely plays more than single notes. The song has pulsating electric piano and arco bass. Winds Of Change is a brief interlude for mostly flute. Song For Tracie Dixon Summers is a modal ballad with synergistic interplay of sax, piano, raga-like bass and percussion. Finally, the journey closes with Maupin’s bass clarinet and Hancock’s polyphonic playing on Past Is Past.

This is a strange and at times haunting album. It’s invariably wistful and is a classic example of 1970s spiritual jazz.