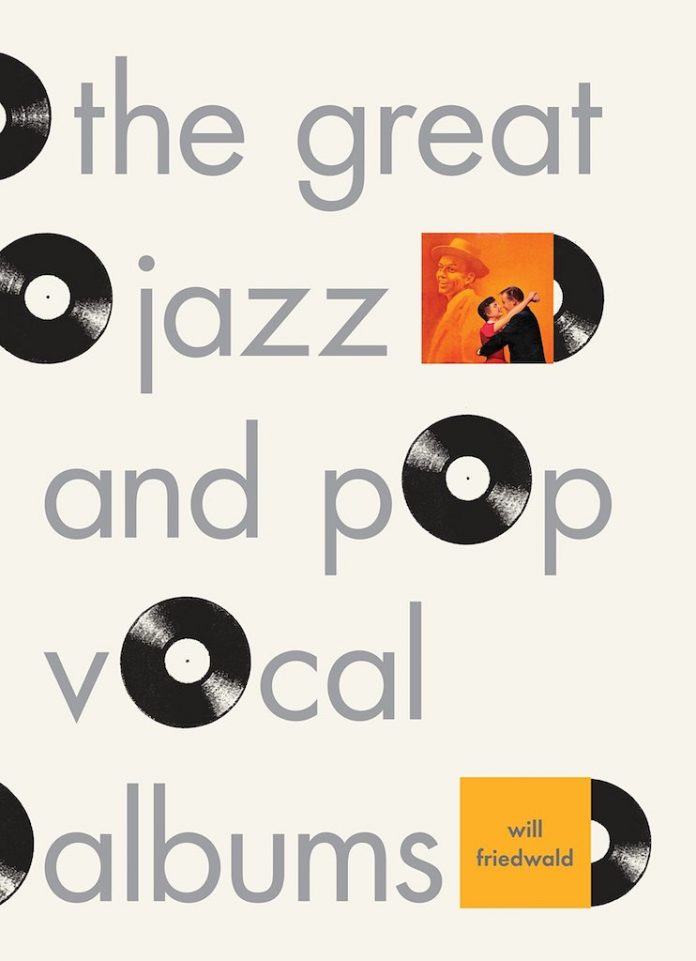 Despite his relatively – or, given his main subject matter, ridiculously – young age of 57, Will Friedwald is rapidly becoming a go-to person on jazz and/or pop culture. His nine titles to date include the definitive account of Sinatra’s recording career The Song Is You, whilst his A Biographical Guide To The Great Jazz And Pop Singers is virtually welded to my desk rather than nestled on my shelves so often is it consulted.

I suspect that The Great Jazz And Pop Albums will be essential reading on bedside tables of anyone with even a remote interest in the history of popular song as captured in the grooves of the 12” vinyl long-playing album.

Nothing if not thorough, Friedwald kicks off with a 13-page introduction entitled The Origins And Development Of The Pop Music Album From To Mother To The Voice (1926-1945) which quickly disabuses most of us (myself included) who accept that the long-playing album was born in the late 1940s and too lazy and/or indifferent to probe further. I know that 78s on a given theme, often selections from shows like Showboat, Oklahoma etc, were promoted as “albums” by virtue of the fact that they were packaged and presented between stiff covers ergo “albums”. But Friedwald is much more thorough. He defines three kinds of album: (1) Existing Songs/Existing Recordings as in “the best of whoever”; (2) New Songs/New Recordings – he traces this genre back to Manhattan Tower in 1946; and (3) Existing Songs/New Recordings. He then identifies To Mother – six songs on three 10” double-faced 78s all recorded within 10 days of each other in March 1926, all dealing with mother, home & family and packaged in an illustrated album cover in which the words “To Mother” are adjacent to a few simple flowers – as the first album “that we know of”.

He then proceeds to fill in the gaps between To Mother and The Voice (more fully, the voice Of Frank Sinatra) – eight songs that were already standards in 1945 and which would “set the standard for thousands upon thousands of pop and jazz vocal albums, many still being made today”.

Quoting a basic rule of storytelling, i.e. you can’t tell a story until it is finished, Friedwald cites the demise of the vinyl long-playing album followed almost inevitably by that of the CD as his principle reason for writing the book, pointing out that with this twin loss we also lost the liner note and/or CD booklet, something entirely lacking on MP3.

The way is now clear for the main thrust of the book – 57 essays, each running around 5-6,000 words, on each of the 57 albums selected by Friedwald as the “all-time great jazz and pop vocal albums”. Whilst this is very much my area I must confess to having only 20, well under half, in my own collection. In some cases this is explainable; for example, although I own titles by Louis Armstrong and several titles by Oscar Peterson, I am a completist of neither artist and so I don’t own Louis Armstrong Meets Oscar Peterson, the first album cited, but I could have. Easily.

The same applies to Nat King Cole, Ella, Sassy, Tormé, Crosby, McRae, O’Day, Whiting, Sullivan, Starr, Clooney and Stafford. On the other hand there is no way I would sully my turntable with the primal screams of Ray Charles or the ersatz philosophy of Bob Dylan. Although a tad miffed by the omission of Mabel Mercer, Dinah Shore and others of that ilk the absence of Dean Martin, Sammy Davis Jnr, Andy Williams, Johnny Mathis and others of that ilk bothers me not a jot.

Despite the bizarre inclusion of an album by Tiny Tim (for whom he makes a fairly respectable case) this is an excellent tome and worth five stars going away in anyones’ critique.