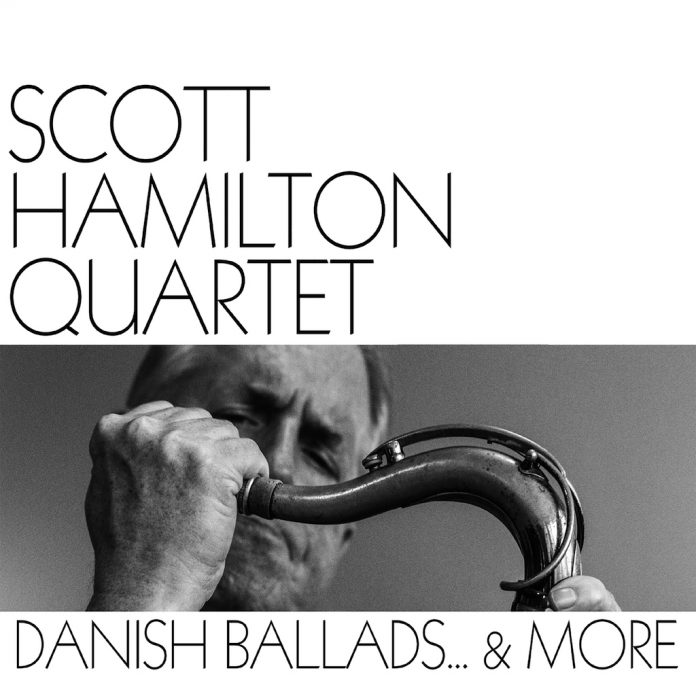 It’s hard to think of any other jazz artist who has mined so many sources of music as Scott Hamilton, whose repertoire continues to grow. In 2013, together with leader and pianist Jan Lundgren, bassist Jasper Lundgard and drummer Kristian Leth, he released the landmark album Swedish Ballads…& More. Writing in the Guardian, Dave Gelly called it a “delectable set” on which Hamilton, “sparked by Lundgren’s inspired piano solos and crystal-clear accompaniment … really surpasses himself”. My guess is that this complementary collection would/will also receive the Gelly seal of approval, as it may even surpass its Scandinavian-themed predecessor.

Again assisted by Lundgren and Leth but with Backenroth replacing Lundgard on bass, Hamilton lends his distinctive tenor voice to a collection of traditional Danish folk songs and popular hits together with two compositions by Oscar Pettiford, Montmartre Blues and Svinninge Blues. None of them are familiar to this reviewer, and so can’t be judged by other performances. This is not, however, a handicap as the 10 titles appear newly minted and are equally attractive. Throughout, Scott in semi-Lestorian mode, offers alternately ravishing, languorous and beefy renditions of “original” material.

In Love With Copenhagen, with Scott and Jan in close romantic accord, could well become a jazz standard. The many other highlights include the ballad On A Saturday Night, first published in 1847, a blissful duet with the hugely talented Lundgren – also recorded in 1973 by Niels Henning OP and Kenny Drew – and a lilting Dance Song, the Danish entry in the 1968 Eurovision Song Contest.

Perhaps the most remarkable track is The Wharf, dating from 1937, with lyrics by the Danish cabaret artist Oswald Helmuth and apparently still frequently heard on Danish radio today. Hamilton and Lundgren give the tune a loping and totally engaging rendition. Montmartre Blues is the longest track, with Hamilton seamlessly weaving slightly hoarse interrelated blues phrases that could go on forever with Lundgren, Backenroth and Leth adding their individual ingredients to the down-home mix. Mention must also be made of My Little Anna, composed by NHOP and dedicated to his daughter. Here it receives a jaunty bossa-nova treatment and is instantly memorable. What next for Hamilton and Co? Norwegian/Welsh/Scottish Ballads…& More?