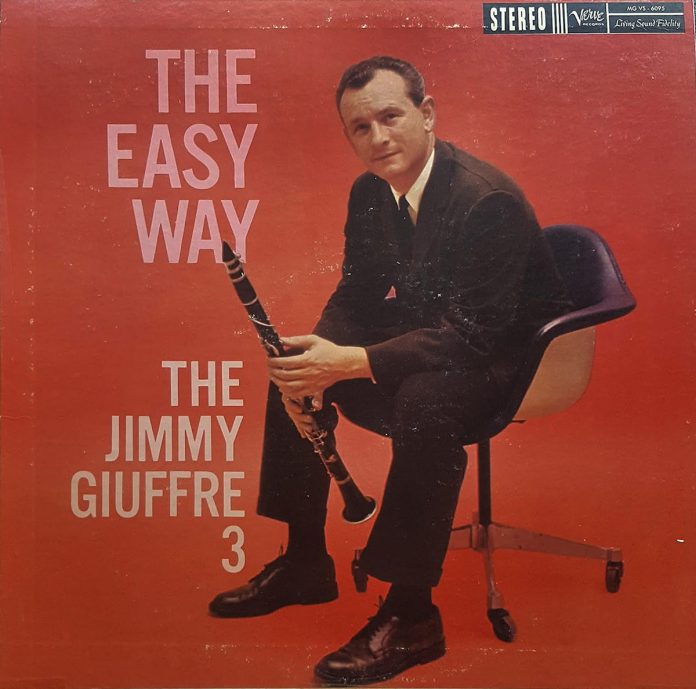 This album leaves me as dissatisfied and unconvinced as I was after hearing Jimmy Giuffre on his recent tour of England. I am not convinced, for one thing, that he really is master of his instrument – the clarinet – and many of my misgivings in this respect are ampli­fied by the astonishing routine, described by Benny Green on the sleeve, which Jimmy adopted in switching from tenor to clarinet, with its overriding neces­sity to extend his playing range from 2½ to 4 octaves.

If it really is as com­plicated as Mr. G. would have us believe, then he is undoubtedly playing up a gum tree, which is both sticky (hence the lack of swing) and makes a very poor music stand (being leafy, like most trees, you cannot see half the notes)!

Whatever the fundamental reason, Giuffre succeeds in producing one of the dullest trio records I have ever had to listen to. One can overdo the play on economy, but one must never appear to be groping for the notes.

The end pro­duct, for want of a better word – it is certainly not jazz as I understand it – is tatty, unexciting, and at times hesitant. Even the admirable guitar of Jimmy Hall and that ever solid bass beat by Ray Brown cannot retrieve an unfor­tunate and embarrassing situation.
Gerald Lascelles

The title derives not from the obvious allusion to late-night jazz sessions in (formerly) smoky bars and clubs, but to the fact that the...

Feeling a need to expand their sound for their next album, Another Fine Mess (Warner, 1975) Back Door were joined in the studio by...

The African-American novelist and story writer William Melvin Kelley Jr. (1937-2017) was born on Staten Island, and grew up in a working class and...

If, as the sleeve suggests, this album was intended as a musical epitaph to the late John Coltrane, it does him less than justice. Side...