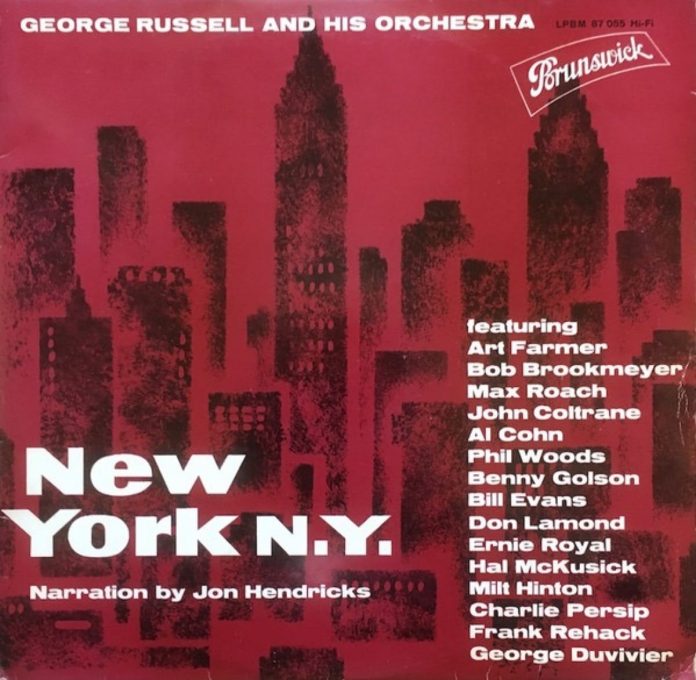 Peter Tanner took a balanced view of an album that was hailed in the more incontinent press of the time as a milestone in jazz. First published in Jazz Journal August 1960

This album has been hailed, in some quarters, as a milestone in jazz, a new conception of jazz presentation, and so on. It turns out to be a moderately in­teresting but thought-provoking exercise in modern jazz writing and playing, to which has been attached an affected narration spoken by Jon Hendricks.

This sort of thing is tolerable for the first couple of playings, but after that you want to skip the dialogue and get on with the music, which isn’t in the least pretentious.

Russell himself is probably one of the most interesting and versatile of to­day’s more cultured jazz writers. He is best known for his thesis on the “Lydian Concept of Tonal Organisa­tion” which roughly means the adoption of flatted fourths in the otherwise nor­mal major scale.

The orchestra plays extremely well and is very simpatico to Russell’s music, particularly in “Manhattan” and “Big City Blues”. The latter is, of course, an original and not the old pop song of the same title. It is also interesting to find Russell writing an acknowledge­ment of the recent Puerto-Rican invasion of New York, which combines modern jazz tones with native Puerto-Rican rhythms.

The medley is well arranged, with good Bill Evans piano,’ but “Helluva Town” is spoilt by too much drumming. Where does Russell think New York is – in the middle of the jungle? Well, maybe he is right at that! Recommended for the writing and arranging.

This CD is constructed from two LPs released originally in 1959/60 on the Audio Fidelity and Cadence labels. They present Shirley as a pianist...

Max Eastley, Fergus Kelly, Mark Wastell: The Map Is Not The Territory

Leonard Feather once called Frances Faye “A consummate night-club performer” and comedian Joe E. Lewis nominated her as the “Queen of the super-clubs”. A...

The opening notes of the boogie floated from the musty cafe, filtering across the yard to the dark little boy playing in the hot...