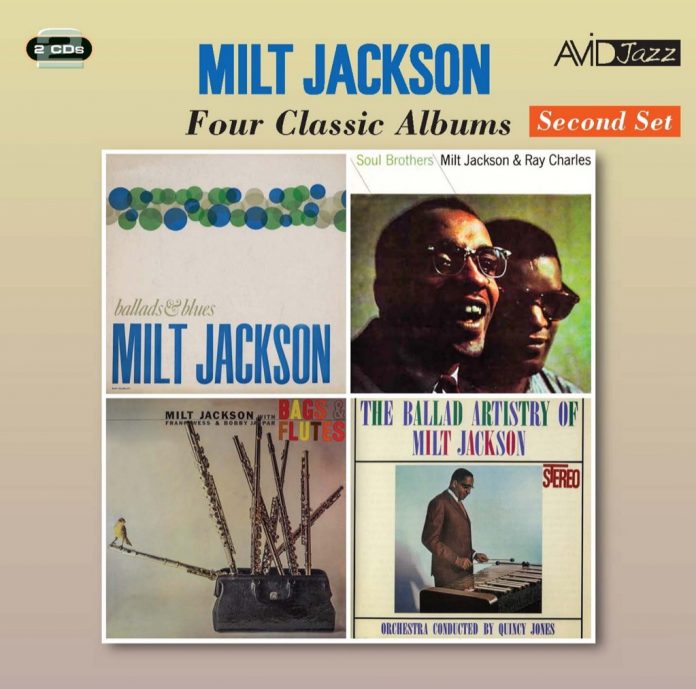 Milt Jackson’s distinguished discography is enormous, and stretches from the 1940s to the 1980s. His oeuvre included live and concert performances with small groups (most famously the MJQ), big bands (including the Basie orchestra), and partnerships with Oscar Peterson, Monty Alexander, John Coltrane and Wes Montgomery. A virtuoso vibes player, he could swing at any tempo and in any company, and was equally at ease with bop, ballads and blues. His taste was always impeccable and his sound instantly recognisable. This Avid release presents Bags in a variety of contexts and is a welcome reissue of four of his notable albums of the 1950s.

Ballads And Blues (recorded for Atlantic) places him in the peer group company of Lucky Thompson, John Lewis, Skeeter Best, Percy Heath and Kenny Clarke. On its release in 1957 Nat Hentoff commented that “Milt, who has proved so often that he is an undeniable master of the blues and is functionally assured on the most heated-up tempos, shows particularly here his strong ability to keep ballads balladic but to play them as jazz”. So In Love, Foolish Things (with strong support from Kessel) and Solitude are taken at gentle tempos with Bags caressing as much as “playing” his vibes. Things warm up considerably on How High, Hello and Bright Blues, with excellent solos from Thompson. On three of the tracks Jackson has the assistance of an unidentified woodwind section, with arrangements by Ralph Burns.

Soul Brothers, another Atlantic release, features Milt and Ray Charles in a blues-drenched programme of their own devising. Unusually, Jackson doubles on piano and also plays guitar on the eponymous Bags’ Guitar Blues. Ray plays compelling alto solos on Soul Brothers and How Long Blues, while Mitchell offers some fine tenor on both titles. Later supplemented by unissued tracks as Soul Meeting, this encounter by two original “Blues Brothers” is well worth hearing.

The remaining two albums are less rewarding. Bags And Flutes features Milt with either Bobby Jaspar or Frank Wess and a rhythm section of Hank Jones or Tommy Flanagan, Kenny Burrell, Percy Heath and Art Taylor. There is a certain repetitiveness in the flute/vibes exchanges, but Bags’ New Groove and Connie’s Blues, both featuring Jaspar, redeem these minor blemishes. The Ballad Artistry Of Milt Jackson, arranged and conducted by Quincy Jones, has Bags surrounded by a large string ensemble, with the stellar rhythm section knitting everything together. The Cylinder opens dramatically with Milt holding his own against the massed strings, and Kay offering metronomic punctuation marks. The remaining tracks are too languorous or “shimmery” for my taste, but try Don’t Worry ’Bout Me and judge for yourself. As usual, the liner notes are in Avid eye-straining fonts.