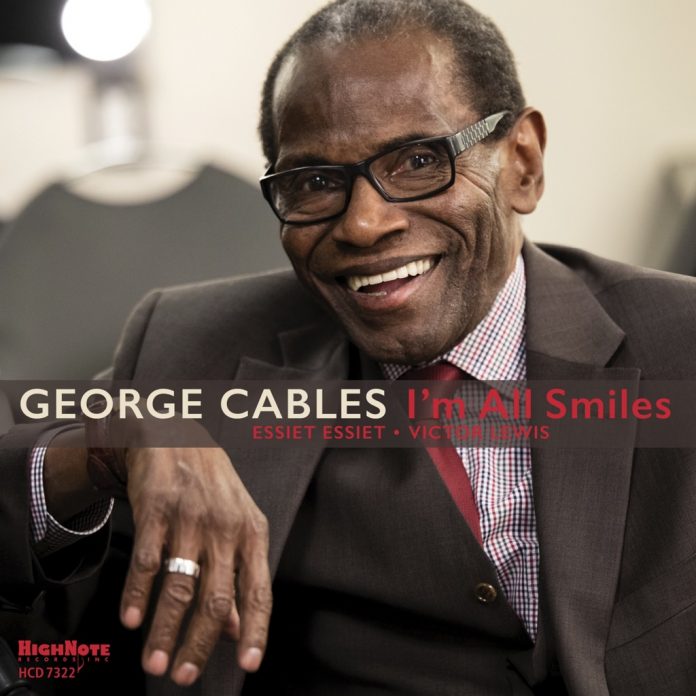 This album is particularly welcome as Cables appears to have come through a series of health problems that culminated in the amputation of part of his left leg and intensive therapy in 2018. The cover photo of his first album since that operation features a smiling and immaculately dressed Cables, while in the informative liner notes (by Steve Futterman) he thanks his friends for their support: “Their positivity was encouraging and uplifting when I needed it most. It made me want to come back stronger than ever”.

The first two titles – Young At Heart and I’m All Smiles – resolve any possible doubts about his “come back”. In fact, throughout the entire album, with sympathetic and empathetic support from Essiet and Lewis – “I depend on them for shading, colouring and dynamics” – Cables displays all of his many pianistic virtues.

They include a remarkable keyboard technique, a quick wit, and an ability to recast standards like Bésame Mucho, at a gently undulating tempo (which he also recorded at twice the speed in a live performance with Art Pepper in Tokyo in 1979), and a haunting Love Is A Many Splendored Thing, which also has a sensitive solo from Essiet.

A Cables original, Celebration, bounces along at an exhilarating pace, while his takes on two Monk compositions, an uptempo Ugly Beauty and an appropriately introspective (but playful) Monk’s Mood (a solo track) are inventive and rewarding. Freddie Hubbard’s Thermo and Wayne Shorter’s Speak No Evil (with a creative passage from Lewis) are respectfully revisited and cleverly revised by Cables and his confrères.

Cables is quoted as saying: “I’m determined to play better despite the ravages of illness and old age.” On the evidence presented here, he has already succeeded.