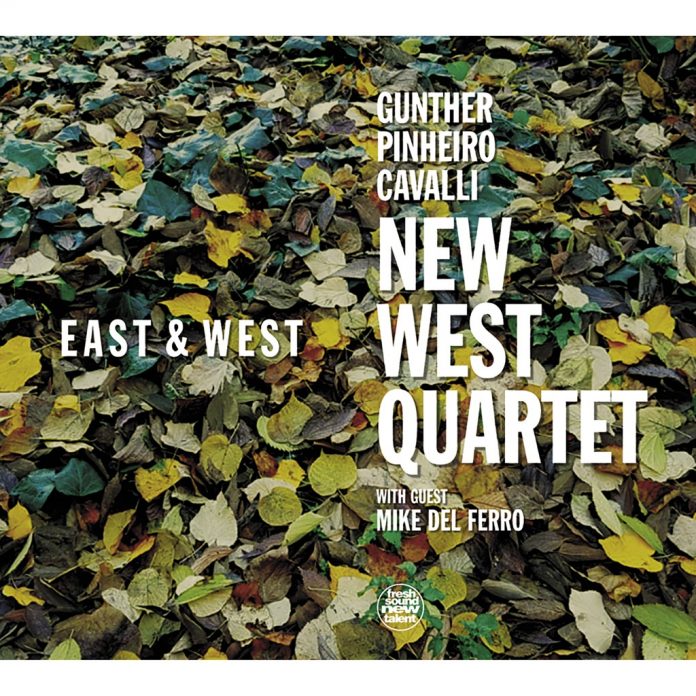 I had the pleasure of reviewing Ricardo Pinheiro’s Triplicity album that he made with Massimo Cavalli and Eric Ineke in 2017. What I didn’t know then was that five months earlier he and Cavalli had laid down tracks for East & West with Bruno Pedroso on drums and the American John Gunther on tenor sax. Amsterdam pianist Mike del Ferro guested on five of the eight tracks.

This is New West Quartet’s debut album. Six numbers are original compositions with Pinheiro, Cavalli and Gunther contributing two apiece. The other two are innovative rearrangements of Monk’s Bye-Ya and Coltrane’s Moment’s Notice.

Bye-Ya is re-assembled with a Latin dance feel and an unusual piano interpretation from Del Farro. The song New West has intricate interplay between sax and guitar and is propelled neatly by Cavalli’s bass work and Pedroso’s deft drumming. With hints of John Scofield in his playing, Pinheiro reveals flavours of the softly amplified interstellar sound that was so riveting in Triplicity.

Pinheiro’s composition Pó Dos Días is a lovely ballad with lyrical sax supplying the initial melody then delicately echoed by guitar. Soft, tinkling piano fades out the song at the close. I was so intrigued by the number I asked Pinheiro about its meaning and he explained that the title is Portuguese for “dust of the days” – the song is about how the days go by and disappear as dust. It’s superb.

Sax and guitar merge uncannily on Boulder Blues to the extent that they begin to sound as one. Poka Blues has crisp military style drum work and intricate bass lines. Here, the guitar quietly asserts prominence during the sax and piano solos and then majestically takes over at five minutes in. Don’t Forget Ornette has marked increases in tempo and dexterous pizzicato bass soloing. The familiar strains of Coltrane’s Moment’s Notice are heard for only 30 seconds and then the song is deconstructed with clever collaborative interplay before nicely coming together again for the last 45. The reflective Que Falta is a slow tempo ballad with exquisite bass and piano duetting.

This is an invigorating, absorbing and contemporary take on straightahead jazz. All the artists are at the top of their game and every track is jam-packed with interest.

Sarah Pierce - 11 May 2021
Danish pianist, synth player and composer Anders Filipsen here creates a soundscape using four synthesisers in live takes, with no further editing involved. What really stands out is the...

Jazz Journal - 29 August 2020
The producer of this musical experience considers that all it requires is an open mind. I think it requires the same capacity for appreciation as those who sit and...