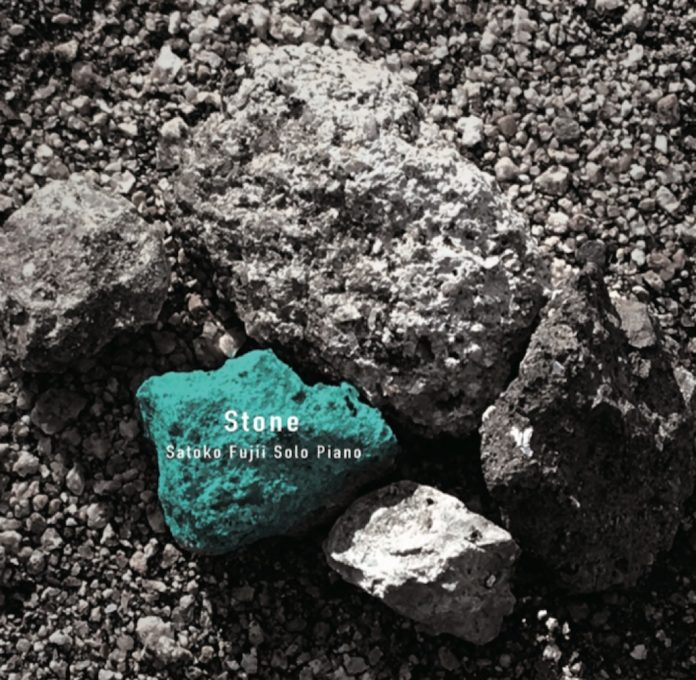 In 2018, the year she turned 60, the versatile, adventurous and highly talented Japanese pianist, composer and bandleader Satoko Fujii issued a CD each month via the Libra, Long Song and ASM labels. You’d think a bit of a rest was in order, but no. In the notes enclosed with Stone she says “I sometimes felt … it would leave me at a loss as to what to do in the future”. In fact, she was energised to move on: “…at the end of those twelve months, I had an even clearer idea of what I wanted to do next. It was as if a fuzzy image in my mind had come into sharp focus”. Stone was inspired by memories of her grandmother, who lost her hearing late in life. One day she told Satoko she could hear “beautiful music the likes of which I never heard before” but she was unable to describe it. Her grand-daughter wondered “What music will we hear for the first time when our ears no longer can hear? … will it be made of sound? Of stillness? Will it feel like waves? Will it resonate in our bodies, in our hearts?”

I’m no geologist, and I’m not sure how the titles of most of the pieces match up with that source of inspiration. The music does, however. (All the tracks are Fujii’s, except Eternity, composed by the late Norikatsu Koreyasu.) The opening sequence is full of mysterious, numinous, enrapturing sounds, until Lava changes the atmosphere, effectively evoking the reverberation of an eruption and the bubbling of the flow. Chlorite (which the interweb tells me is found in igneous rocks cooled from lava) is also agitated, suggesting volcanic action, but mostly the music draws you in to entrancing landscapes, with hints of further inviting vistas just around the next turn.

Fujii employs pretty much every method of eliciting sounds from all parts of the piano, sometimes playing its innards, sometimes preparing the strings to create non-standard tones and scales, agitating the pedals to create ominous rumbling crescendi, coaxing sounds from the body of the instrument, and using the E-bow, an electronic gizmo that enables an arco effect to be produced from the piano strings. All these techniques are employed with a considerable musical sensibility. Even playing conventionally she is adept at creating magical, unfamiliar sounds that can stimulate your sense of wonder and affect your emotions with a passage of sheer beauty or majesty.

Confluence was recorded on the same day as Trachyte, River Flow, Sand Stone, Marble and Waterfall on Stone. (The Samurai Hotel is, by the way, actually a recording studio boasting two Steinways.) Fujii has worked in piano-drums duos before, and she recorded a trio including Lopez in 2018 as part of her CD a month marathon, but that recording has not, so far, been issued. The pair interact with exemplary responsiveness, sensitivity and generosity. The somewhat prosaically titled Road Salt is fairly representative of the CD overall, with its lissom, dancing melody, crystalline textures and sensitive percussion, until the tension builds up, preparing us for the ferocious Run!. Even there, when things get nicely nasty, the duo build the intensity and complexity as a partnership rather than a cutting contest. Throughout the session Fujii juxtaposes simple yet spellbinding folk-like melodies with dense clusters of notes and urgent, compelling patterns or, as on Tick Down, will inject just a hint of harmonic unease into exquisite soul-soothing melody.

The beautiful and impressionistic Asatsuyu and Three Days Later were pre-composed by Fujii, the rest of the tracks were wholly improvised. As on Stone, here and there Fujii makes use of the E-bow to create gorgeous sustained tones that sound like Tibetan singing bowls.