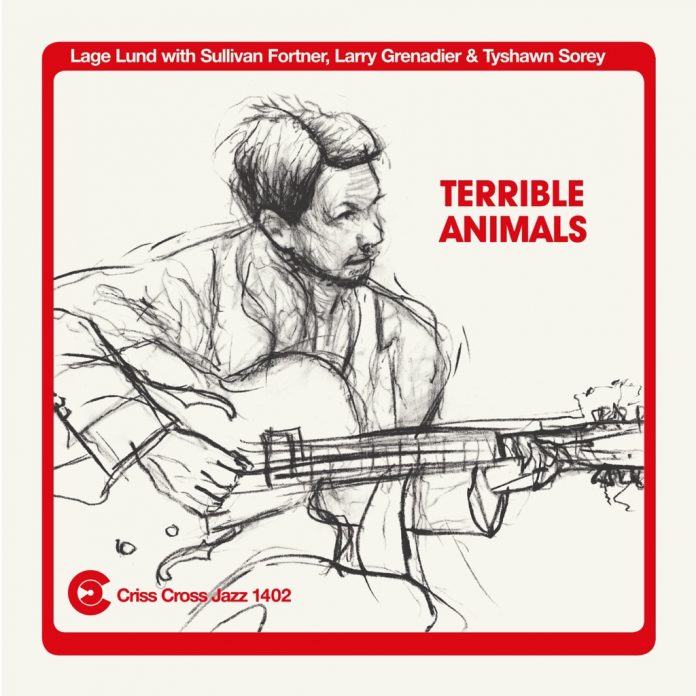 Lund is a highly original guitarist whom you may find, for instance, refreshingly turning Come Rain Come Shine inside out. His subtle and distinctive voicing is for the jazz listener what a diamond necklace is for the mistress. He has collaborated with Bill Stewart, Ben Street, Aaron Parks and Marcus Strickland, among others.

On his latest outing, Terrible Animals, the Norway-born Lund is assisted by pianist Sullivan Fortner, bassist Larry Grenadier and drummer Tyshawn Sorey. Not every performance on Lund’s seventh album on Criss Cross is convincing, but his preoccupation with the avant-leaning idiom has resulted in an investigation of life’s irreversible, mysterious forces that is likely to haunt the listener for days on end.

Terrible Animals is a reference to writer Kurt Vonnegut, who said: “We’re terrible animals. I think that the Earth’s immune system is trying to get rid of us, as well it should”. Lund’s free-form title track, moving from nimble fingerpicking to scorching licks, is an interesting variation of Vonnegut’s gloomy sentiment. Apparently, in Lund’s fantasy, the terrible animals have instead taken matters in their own hands and finally cooperatively colonised a newfound green planet in a distant galaxy, only to immediately make a wreck of that paradise of water, rainforest and wildlife as well.

Hard Eights combines polyrhythm, straight swing and a raga-like drone and the catchy, fluent line of Lund moves in and out of his spooky, overdubbed harmonic background. Lund makes superb use of effects, just as easily conjuring up sounds of the synth, harp or rock guitar. The imaginative quartet makes the most of Ray Ray’s poppy chord pattern, perfecting it with intricate drum figures and florid piano and guitar stories. It’s a mid-tempo tour de force that works to an exciting climax. We Are There Yet is smooth but layered jazz rock with a fairytale-ish quality. The odd meter and the meaningful simplicity of these melodies effectively invite the participants to simultaneously interact and let their true voices ring.

Sullivan Fortner’s playing style, a remarkable mix of freedom and homogeneity, is very enticing. He’s the musical equivalent of a baseball player who starts on third base and on the strength of his intuitive creativity has changed the rules, both teams suddenly adhering to the new aesthetic. Drummer Tyshawn Sorey turns out to be a 21st century Michael Giles or Bill Bruford, delicately or raucously filling spaces with figures on snare and toms. Giles and Bruford subsequently held the drum seat of the legendary progressive rock band King Crimson. Come to think of it, Lund might well be described as the somewhat less recalcitrant nephew of the band’s indelible leader, Robert Fripp. His compositions on Terrible Animals are similar to Fripp’s songs and he mirrors the Englishman’s multi-faceted playing style and genre-defying zest.

Terrible Animals holds more than a few surprises. But with a total length of 67 minutes, including a number of inaccessible, abstract sketches, the listener perhaps will start to feel like a handyman that is instructed to saw through a plate of marble. Vonnegut, it should be pointed out, rarely wrote a book with more than 275 pages, flowing with ideas and to the point to boot. There’s the art of scraping and selection to consider.