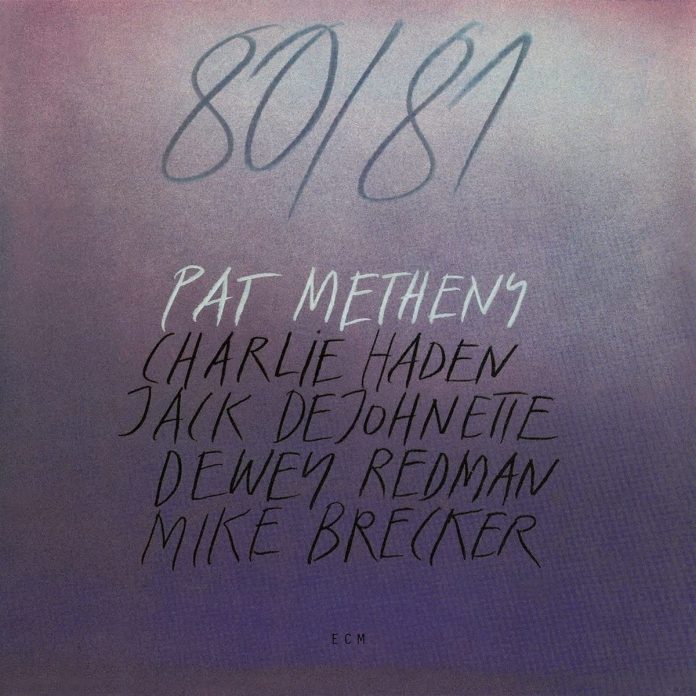 This is a collaboration of revered figures from diverse directions: free jazz, jazz rock, bop, even rock ‘n’ roll. They are all competent in each others fields, and the result is an album of broad variety.

Side one has Pat Metheny playing acoustic guitar (which by processing assumes the depth and resonance of an orchestra). His folk song has a kind of Slavonic flavour, and features some excellent outside blowing by Brecker which could be mistaken occasionally for trumpet work.

A step sideways brings us to the bebop/free style of side two. The bop-based title track gives the first taste of the Metheny electric guitar, with its heavy echo, the flurries and cascades of bubbling notes. The Bat forms a ballad interlude, featuring plaintive soaring excursions from both saxophonists, before Haden’s bass introduces Ornette Coleman’s Turnaround. Haden later takes a solo improvised from a stream of consciousness, where ideas are put forward, questioned, retracted, ad­justed and resubmitted. It’s not hesitancy, but a humorous documentation of the creative pro­cess with all its false starts and cul-de-sacs.

Coleman’s wry humour is superseded on side three by the in­sidious menace of Metheny’s guitar: Clusters of notes (sounding like swarming bees) swoop in and out above sparse rhythms from DeJohnette’s drums on Open. Thunderous unison climaxes are juxtaposed with haunting inflections. Pretty Scattered is in the same vein, but dashed with greater colour, and a kind of macabre swinging quality. In particular the main theme is dramatic, full of staccato pulses us­ing anxious, ‘scattered’ intervals.

The fourth side smoothes things out. Every Day is a slow harmless ballad, and Metheny concludes with a short acoustic guitar excursion, Goin’ Ahead.

Brian Payne - 26 June 2021
There’d been talk of Louis Armstrong meeting up with Duke Ellington’s orchestra for some time but this never materialised. Instead, in 1961 Ellington sat in with Satchmo’s All-Stars as...