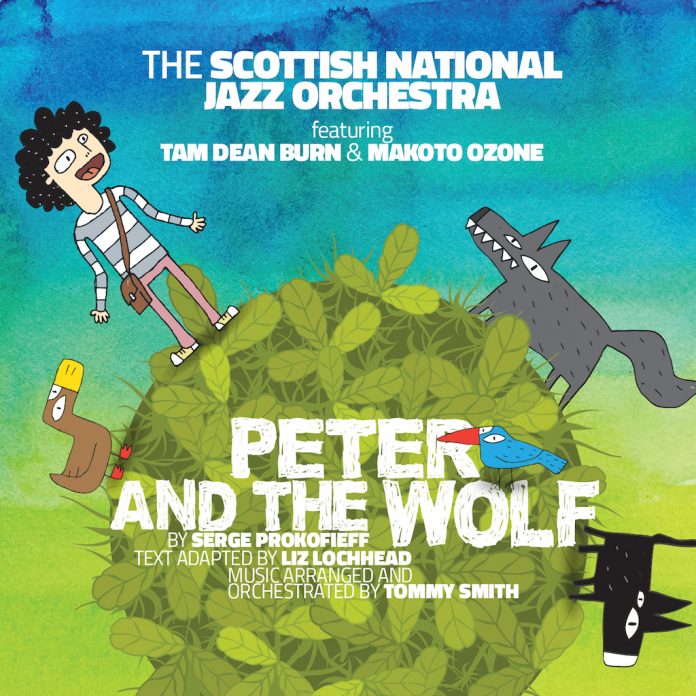 Apart from sustaining the impressive breadth and depth of its repertory programme, in recent years the SNJO, led by the indefatigable Tommy Smith, has made some notable recordings, e.g., Celebration with Arild Andersen (2012), Culloden Moor Suite with Bobby Wellins (2014), American Adventure with Mike Stern (2016), Beauty And The Beast with Bill Evans (2106) and Sweet Sister Suite (2018), music commissioned from Kenny Wheeler, with Laura Judd and Irini Arabatzi.

Diverse and distinctive as these recordings remain, this beautifully recorded live affair from Queen’s Hall, Edinburgh is truly a different kettle of fish. Well-known Scottish actor Tam Dean Burn interprets distinguished Scottish poet Liz Lochhead’s lively adaptation of Serge Prokofieff’s Peter And The Wolf – the text of which comes in the handsome packaging.

At just over an hour, this must have made for a terrific evening. Dean delivers the cautionary children’s tale with singular panache; various members of the SNJO comment on key “characterful” moments in the recitative featuring duck, cat, wolf etc., the ensemble comes on both punchy and subtle, often in Ellingtonian mode (the SNJO cut In The Spirit Of Duke in 2013) and eminent guest Makoto Ozone (with whom the SNJO recorded its version of Mozart’s piano concerto nr. 9, Jeunehomme, in 2015) contributes some brief and tasty lines.

As you would expect from this ensemble, the playing is razor sharp; and as you would expect from Smith, the arrangements are vibrant and arresting, the multi-hued yet crisp diversity of voicings and rhythmic accent pitched deliciously between the expressionistic and the decorative, the swinging and the (broodingly) reflective.

I couldn’t detect any overt Scottish motifs in the music – but none is needed, so thickly (and engagingly) does Tam Dean Burn lay on the oot thair flavour of Liz Lochhead’s words. All in all, serious fun.