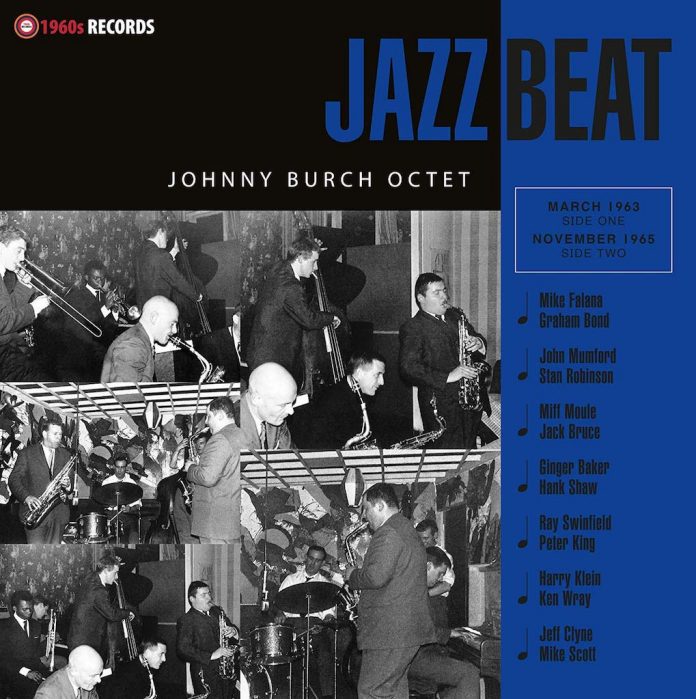 Over the last few years Nick Duckett’s R&B label has continually put out issues, mainly compilations, that chronicle the development of the Soho jazz scene in the early 1960s, although others have specific artists – Harry South, Georgie Fame, Dick Morrissey. The latest is by the much neglected pianist Johnny Burch and his Octet, recorded for BBC Radio Jazz Club.

The 1963 session has lively contributions from Nigerian trumpeter Mike Falana, trombonist John Mumford, Stan Robinson on tenor, Graham Bond on alto and Miff Moule on baritone, although the names that catch the eye are those of bassist Jack Bruce and drummer Ginger Baker, who went on to find greater fame and fortune with the Graham Bond Organisation and in the later 60s, Cream. These tracks show off their early jazz credentials.

The recording is rough, but the playing enthusiastically modern and explosive – be prepared as Bond launches into a wonderfully fiery solo, verging on the experimental, on Moanin’. It also includes, interestingly, Early In The Morning, an arrangement (by Baker) of an American prison work song that Alan Lomax recorded in the 50s for the Library of Congress, but with terrific horn solos.

The other session is from 1965; less wild but no less committed, with an experienced line-up that sees Hank Shaw on trumpet and Peter King playing tenor, and several familiar compositions are covered. An uptempo version of Milestones has a first rate alto solo from Ray Swinfield. There are some alternate takes and presenter Tony Hall’s introductions are also included.

Although under-recorded, Burch found regular work around London in the subsequent years – he appeared a number of times when I ran the Seven Dials and was a highly-regarded, genial, good-humoured man, well able to temper the often volatile drummer Tommy Chase, with whom he worked in a group with Ray Warleigh (and made a very good LP for Spotlite called One Way).

This issue helps redress the balance and is well worth getting, not least as documentation of the burgeoning jazz scene in 60s London, an example of what was happening away from the onslaught of pop culture and in parts an indication of what was to come. The informative sleeve notes by Richard Williams are excellent and the inclusion of contemporary music press cuttings an intriguing addition, especially those by the Melody Maker’s Bob Dawbarn.

To buy Jazzbeat and find out more about the Johnny Burch Octet, please click this link

Hugh Rainey - 18 December 2019
The group's name cheerfully confirms its dedication to traditional New Orleans jazz, though not exclusively to the strict erstwhile purist style epitomised by Bunk Johnson and George Lewis. The repertoire...