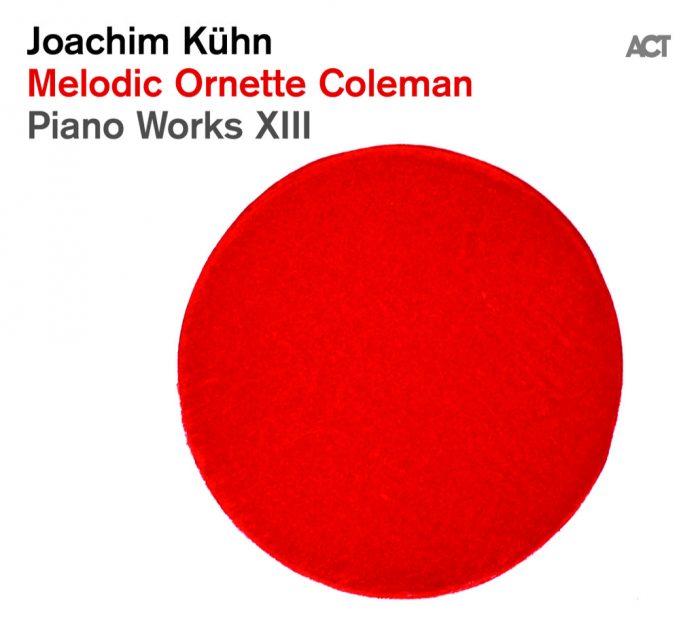 The 75-year-old pianist can variously be heard with his New Trio, featuring Eric Schaefer and Chris Jennings – and with Archie Shepp, Michel Portal, Daniel Humair and Emile Parisien. But this is a solo outing, where he performs compositions by Ornette Coleman.

Coleman and Kühn first met in the early 90s, and began to perform regularly. Coleman’s harmolodic approach might seem to exclude chordal instruments but used the latter quite often in his later career. As well as touring regularly in a duo with Kühn, he also recorded with Geri Allen, Paul Bley and David Bryant.

“Ornette flew me from Ibiza to New York several times a year”, Kühn recalls. “He rented a Steinway grand piano and we would play for a whole week, fourteen hours a day”.

It’s interesting to hear that the Leipzig-born pianist’s first influence was Bach – when he performed with Coleman, the next evening he would often appear with his “Bach Now” project with Thomanerchor Leipzig. The partners each had their own take on tonality and its limitations: Coleman’s “harmolodics”, Kühn’s “diminished augmented system”.

Although they recorded together only on Colors: Live From Leipzig (Verve, 1997), the pianist explains that “From 1995 to 2000 I was able to play sixteen concerts with Ornette. Before each concert, he wrote ten new songs, which we had worked out and recorded in his Harmolodic studio in Harlem for a whole week”.

But after the concert, these pieces were never played again: “I am the only one who has all the recordings and the sheet music of the 170 pieces”. So now he has reassembled and recorded them for solo piano. Apart from Lonely Woman, none of the pieces was ever recorded by Ornette.

The album was recorded in the music room at Kuhn’s home on Ibiza, on his own Steinway, and features 13 Coleman compositions, plus Kühn’s tribute, The End Of The World. There are two versions of Lonely Woman – the first subtitled Rambling, the second Ballad – and on both versions, Kühn seems to simplify its effect by making harmony explicit.

As for the other compositions, it’s not clear what their status is – Kühn says that he was directly involved in the compositional process, but none of them is as compelling as Lonely Woman. The results seem only intermittently involving – an interesting album, but I’d say that “Melodic Ornette Coleman” seems a misnomer.

Discography
Lonely Woman; Lost Thoughts; Immeriscible Most Capable Of Being; Songworld; Physical Chemistry; Tears That Cry; Aggregate And Bound Together; Hidden Knowledge; Love Is Not Generous, Sex Belongs To Woman; She And He Is Who Fenn Love; Somewhere; Food Stamps On The Moon; Lonely Woman; The End Of The World (53.30)
Kühn (p). Ibiza, January-March 2018.
ACT 9763-2