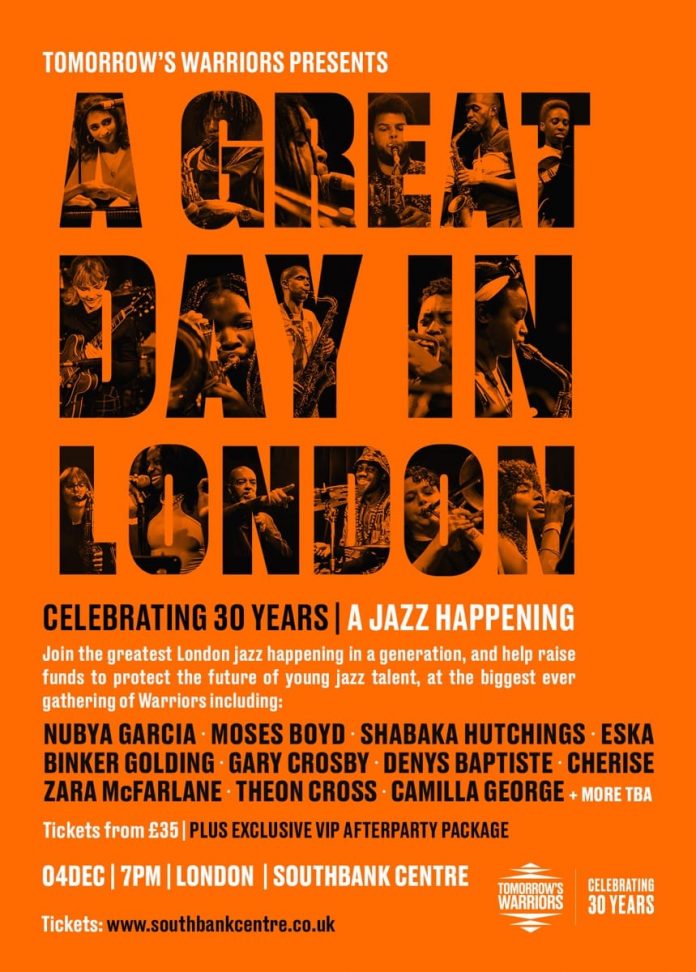 Under the title “A Great Day In London – Celebrating 30 Years – A Jazz Happening” the Warriors stage a fundraising concert at 7pm at The Southbank Centre, London. Among those performing will be Nubya Garcia, Moses Boyd, Shabaka Hutchings, ESKA, Theon Cross, Binker Golding, Denys Baptiste, Zara McFarlane, Camilla George and Cherise.

Likening today’s London jazz world to that of late 50s New York, Warriors’ co-founder and director Gary Crosby said: “The original image of A Great Day In Harlem by Art Kane documented a moment in time of a burgeoning scene, and the parallel we see today in UK jazz is undeniable.”

Described in the publicity as a celebration of “a seismic moment in UK jazz” and “the greatest London Jazz Happening in a generation”, the event will gather Warriors from across the organisation’s 30-year history, and produce a photograph of over a hundred current and former Warriors.

Tomorrow’s Warriors was formed in 1991 following a so-called jazz revival that was acclaimed by the London entertainment press in the early 1980s and has been re-proclaimed by publicists with regularity through the ensuing decades.

Tickets for the concert are £35, but £150 buys a VIP Package that adds an invitation to an afterparty, the best seats in the house, and a Warriors bag.