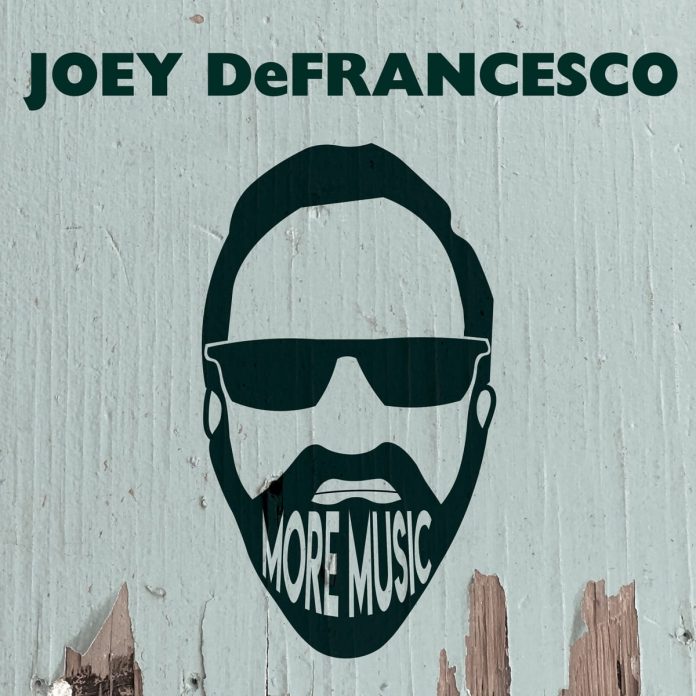 This is Joey DeFrancesco’s 39th album as leader. The prolific Hammond organist, pianist, keyboardist and trumpeter makes his recording debut on tenor sax here as well. All 11 numbers on the album are composed and arranged by him.

DeFrancesco reached 50 this year. He has the distinction of being one of the youngest musicians to have played with Miles Davis, with whom he toured on leaving school in 1988. Since then he’s worked with many top class musicians including Benny Golson, Jimmy Smith, Bobby Hutcherson, John McLaughlin, Pat Martino and John Scofield.

His current trio comprises “new” guitarist Lucas Brown, who doubles on organ when DeFrancesco concentrates on other instruments, and Michael Ode on drums. Ode is not so new having accompanied DeFrancesco in his 2018 collaboration with Van Morrison for the album You’re Driving Me Crazy.

More Music is a mix of soul jazz, blues and hard bop with a touch of modal jazz thrown in for good measure. To these ears however, the organ’s dominance often fosters a symmetry of sound to the extent that it’s sometimes difficult to distinguish one number from the next.

This apart, the opening track Free has quick and vigorous trumpet from DeFrancesco. It’s followed by Lady G, a slower more melodic piece in tribute to his wife Gloria. This is when we first hear DeFrancesco on tenor sax and he’s surprisingly good at it – it’s possibly the best track on the album.

Just Beyond the Horizon has brisk drums from Ode and tight organ / guitar duetting. In Times Of Reflection is plaintive with soft guitar from Brown and thoughtful trumpet soloing from the leader. Angel Calling has a spiritual jazz ambiance with DeFrancesco back on tenor.

Where To Go has both organists going head to head whilst Roll With It has DeFrancesco on Hammond and Ode on drums building on each other’s input to move the number along. DeFrancesco’s last tenor outing comes in And If You Please where he also sings. It’s followed by the title track which has something of an old B movie soundtrack atmosphere to it while in contrast, the next number, This Time Around, has a contemporary air. The album closes on a jubilant note with Soul Dancing.

If you’re an organ fan then this album is right up your street. If not, you may have some difficulty lasting the course.

Michael Tucker - 11 November 2019
Born in Athens in 1978, Sideris moved early from flute to first electric and then acoustic bass and has studied at Boston's Berklee and also in New York, including...