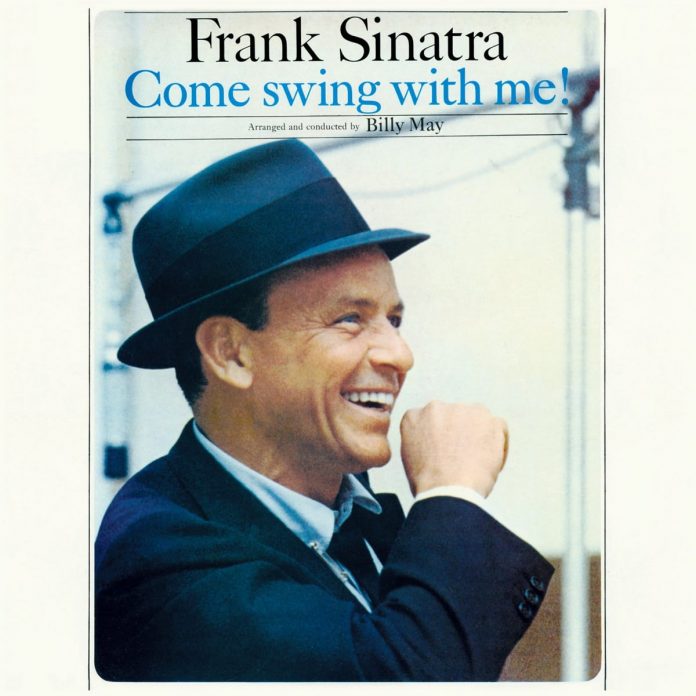 There are two albums here: Come Swing With Me, Sinatra’s last album for Capitol, and Swing Along With Me, his next and first album for his own label, Reprise. Is it a coincidence that he sounds less involved in the former, and more eager in the latter?

Both albums feature the perfect arranging of Billy May, but the charts on the Capitol, which are written for brass and rhythm section alone, are crisp and clear, so good that they draw one’s attention away from the singer. All well and good for the listener, but hardly the proper aim for a vocalist’s album!

Capitol were miffed that the Reprise set was so close in its sound and its name to their own that they sued Sinatra and won. Even at this late stage of the game Sinatra and May were able to find enough classic material for their 24 tracks (the final four tracks, described as bonus, have Frank backed by a Johnny Mandel orchestra).

There is no better fount for good musicians than the Hollywood studios, and the orchestral work throughout is stunning.

Perhaps these days Sinatra’s singing is passé, and the voice here is indistinguishable from that on the multitude of forerunners (his fans would probably ask for no more). But he was the best and his work from the early 60s – all of these tracks – outshines anyone that came before or since. And he was, of course, a very fine jazz musician…

Discography
[Come Swing With Me] Almost Like Being In Love; Five Minutes More; American Beauty Rose; Yes, Indeed; Sunny Side Of The Street; Don’t Take Your Love From Me; That Old Black Magic; Lover; Paper Doll; I’ve Heard That Song Before; [Swing Along With Me] Falling In Love With Love; The Curse Of An Aching Heart; Don’t Cry Joe; Please Don’t Talk About Me When I’m Gone; Love Walked In; Granada; I Never Knew; Don’t Be That Way; Moonlight On The Ganges; It’s A Wonderful World; Have You Met Miss Jones?; You’re Nobody ’til Somebody Loves You; [bonus tracks] Let’s Face The Music And Dance; You And The Night And The Music; Ring-A-Ding-Ding; In The Still Of The Night (77.04)
Hollywood, 1960-61.
Black Coffee Records 2012

John White - 22 January 2019
Johnny Griffin and Eddie Davis were a dynamic and prolific duo. Both had distinctive sounds and techniques: Griffin (“The Little Giant”) and the fastest tenor on the block; “Lockjaw”,...