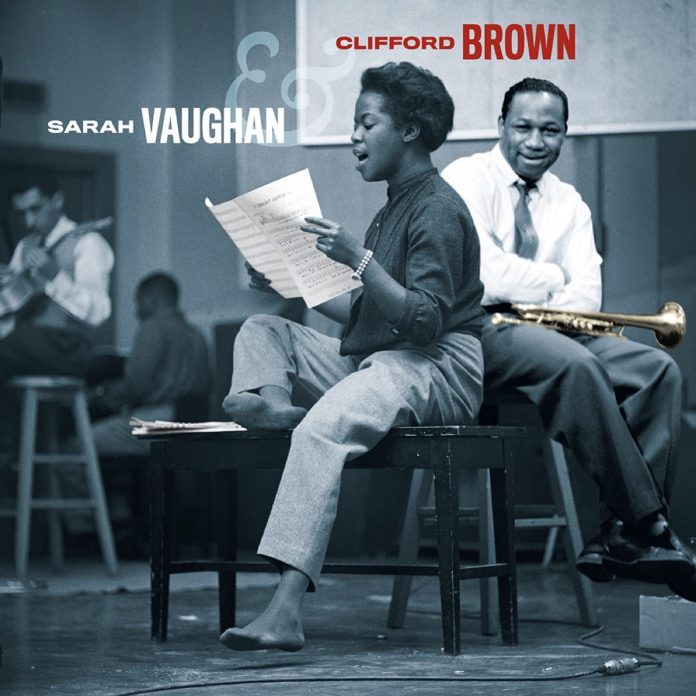 The sticker on the cover proclaims that this LP is “180-gram Colored Virgin Vinyl”. I was somewhat disappointed as I’d hoped to get the Extra Virgin edition. Nonetheless, this is a beautifully packaged product, not least for the characteristically perspicacious notes by Brian Morton.

Morton and/or Richard Cook gave this self-titled album (originally issued on EmArcy as just “Sarah Vaughan”) a coveted five-star plus “crown” rating in the Penguin Guide To Jazz On CD. They maintained that the crown did not necessarily indicate that the recipient album was an all-time great but was one they had a special affection for.

I can understand why they felt especially fond of this album. It has a warmth and intimacy that is intensified by the acoustic, well suited to the predominantly slow and medium tempi. Although Vaughan does sometimes scat, as here on Lullaby Of Birdland with its relaxed medium-paced swing, her primary method was to elongate the notes, usually pitched as written but with a well-controlled vibrato, rarely if ever disrespecting the essence of the melody.

The band is a credit to her. Brown is, of course, superb, Quinichette contributes some fine solos and Mann, years before his commercially successful eclectic work in the hippy era, acquits himself well too. Jones, Benjamin and Haynes are impeccable in all moods. The album is book-ended by two versions of September Song, the second a bonus track not on the original album, with strings instead of the sextet, and Vaughan approaches each with equal conviction.

Never as widely popular as Ella Fitzgerald or as much mythologised as Billie Holiday, Vaughan was technically accomplished and could convincingly put across the story and emotion of any song. Brown’s early death a few weeks short of his 26th birthday inevitably makes us wonder whether he would have become an even more impressive player or plateaued or changed course. Inhabitants of some other dimension may know the answer, but he left us with ample evidence of a major talent whose elegant yet emotionally committed playing still sounds as fresh and engaging as ever.