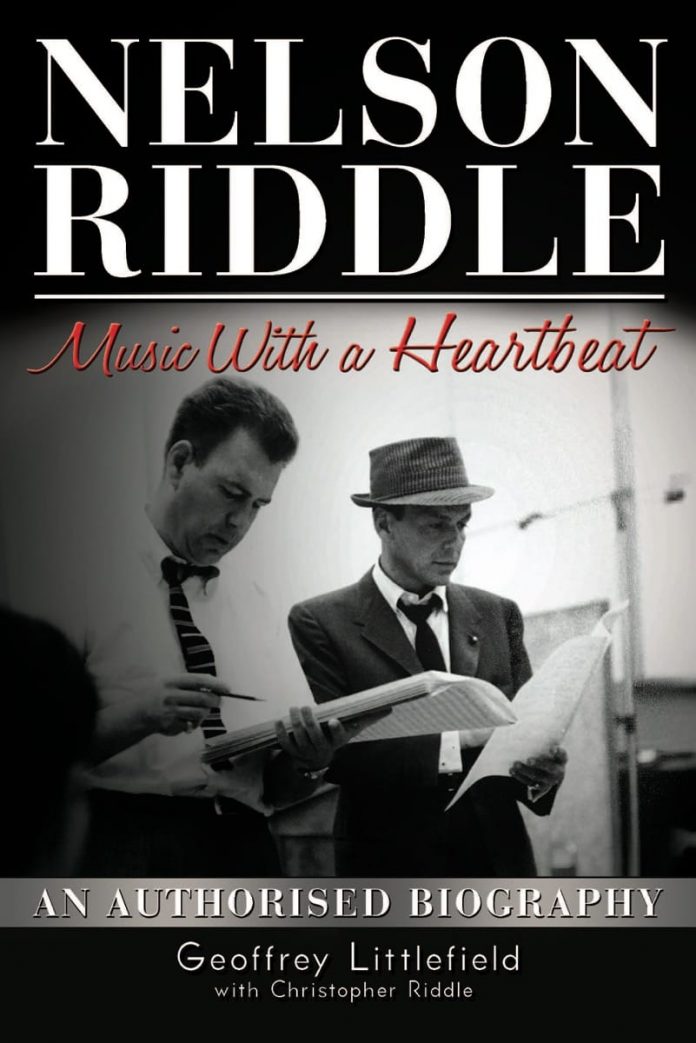 The old adage that a book cannot be judged by its cover certainly applies to Geoffrey Littlefield’s “authorised biography” of famed arranger, composer and leader Nelson Riddle. A handsome cover photo shows Nelson with Frank Sinatra (whose flagging career he helped to rescue and reignite) poring over music manuscripts in a recording studio. But the book itself is a shambles. Pedestrian prose, ungrammatical sentences, superficial analyses, apparently scissors and paste assembly, over-quotation, excessive use of exclamation marks and the word “iconic”, detract from any meaningful estimates of its ostensible subject.

Littlefield gratuitously confides that “I don’t know about you, but I always see a movie or TV series as being a marriage between the story and the music.” And also that “1960 was the year Real Madrid thrashed Eintracht Frankfurt 7-3 in The European Cup Final at Glasgow’s Hampden Park.” (Whether Riddle played or was even present is not revealed.)

Bibliographical references are sparse and incomplete, while the index idiosyncratically lists its human subjects by their given rather than family names. It includes an intriguing entry for the vocalist “Billy” (sic) Holiday. Far too many pages are devoted to a fatuous quiz – “Hey Diddle, Riddle” – with 100 questions and the answers supplied (“no need to Google”) with the questions reprinted at the end of the book. Four conflated examples will more than suffice: “What is Nelson’s middle name? SMOCK. What did Frank Sinatra say when he first heard Nelson’s arrangement of I’ve Got The World On String? THAT’S A GASSER. WHO DID THAT? Where was Nelson born and in which state? HAVENSACK (sic) NEW JERSEY. What was the middle nickname of famed trumpeter Harry Edison? SWEETS”. Perleeze.

This is not, then, a considered portrait of Riddle’s impressive achievements, or his life and (many) “loves”. Although his son Christopher, a trombonist in and subsequently leader of the Nelson Riddle Orchestra (NRO) provided Littlefield with a generous amount of personal reflections about this illustrious father, these are simply spliced rather than incorporated into the repetitive text. Around 70 pages are devoted to the seminal Riddle and Sinatra collaborations on the Capitol and later Reprise labels, but there is nothing new. Perhaps the best quote in a book of over-quotations is Riddle’s reported comment that “Capitol wanted to give Frank a new suit of clothes. I guess I was his tailor.” Riddle’s musical and openly adulterous long relationship with Rosemary Clooney, his two marriages and seven children, and his musical relationships with, among others, Johnny Mathis, Judy Garland, Dean Martin, Ella Fitzgerald and Linda Ronstadt receive perfunctory mentions.

Numerous well-chosen photos (some in colour) and complete discographies – including Riddle’s scores for movies and TV series – only partially redeem an obviously well-intentioned but poorly constructed tribute to a major figure in American popular music who has yet to receive the biographer he deserves. In the meantime, Peter Levinson’s September In The Rain The Life Of Nelson Riddle (2001) and/or David Morrell’s Nelson Riddle: The Man Behind The Music (2013) offer more nuanced accounts. Better still, listen to the albums – especially those with Ella (8), and Francis Albert (19).