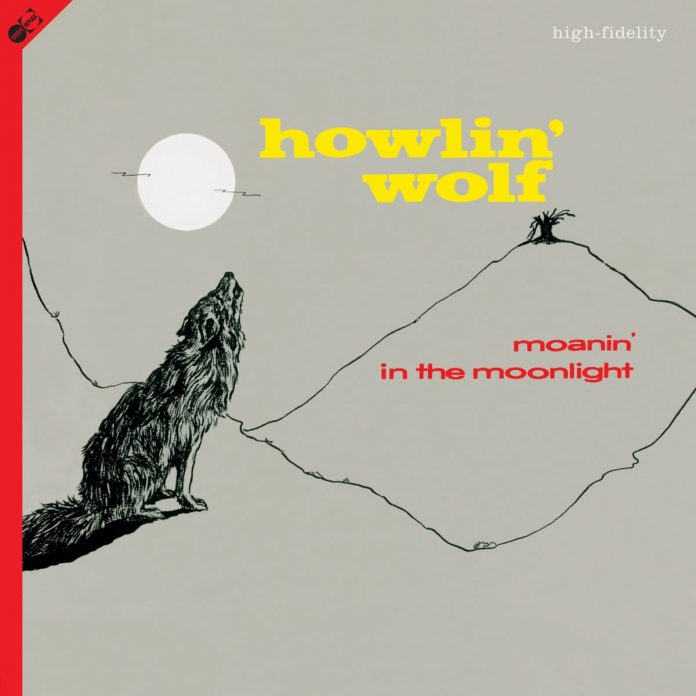 This vinyl collector’s edition of Howlin’ Wolf’s debut album for Chess Records was voted 153 out of the 500 greatest albums of all time by Rolling Stone magazine. Personally, I would have placed it higher as this is one of the stand-out inspirations for young British blues musicians the late 50s and early 60s. This was an album eagerly sought out by the likes of Alexis Korner, John Mayall, Chris Barber and Mick Jagger, who in turn not only created a new music and youth culture but made young America sit up and appreciate what they had ignored for years.

Born Chester Arthur Burnett in White Station, Mississippi, 10 June 1910, Wolf was slow to take up music professionally. He first performed in his local Baptist church before moving on to juke joints and parties. On stage, Wolf was (literally) larger than life with a domineering physical presence and booming voice. Off stage, he was a pragmatist who continued farming in order to ensure his family had the income it needed. It was working off the land that ensured Wolf was steeped in the “Delta dirt”. Only when he judged that he had the means to support his family from music did he become a full-time musician; but not before going back to school to get his basic diploma in education and then to college to study accountancy.

Wolf was determined to manage his own career and not be manipulated by unscrupulous managers and studios. He also had a reputation for paying his band members a proper salary and even health insurance. Wolf was well into his 40s when he first recorded professionally. He was first taught to play the guitar by Charlie Patton and the harmonica by Sonny Boy Williamson. That was some education, but it was his powerful voice that set him apart. Despite his trademark “howl” whilst performing, it was (allegedly) his maternal grandmother who first called him Howlin’ Wolf when he was a child and the name stuck. An alternative explanation is given by blues historian Paul Oliver, who writes that Wolf once claimed to have been given the name by country singer, Jimmie Rodgers, whom he idolised. Wolf once said that he tried to imitate Rodgers yodelling but it came out more like a howl. Whatever the truth, it was said of Wolf that he had the singular ability to rock the foundations of the stage whilst scaring the customers out of their wits.

Wolf’s recording break came in 1951 when he was spotted by Ike Turner, who was working at the time for Sam Phillips as a scout. He recorded Moanin’ At Midnight and How Many More Years for Phillips, who subsequently sold both sides to Chess in order to concentrate on a young and upcoming Elvis Presley. Confusingly, a short spell of recording for the Bihari brothers at Modern Records then ensued. After some contractual negotiations, Wolf finally ended up at Chess and a move to Chicago followed where a successful recording partnership began. In Chicago, Wolf assembled a new band including guitarist Hubert Sumlin who would prove to be his faithful and long-term musical partner.

Wolf’s first single releases for Chess were the above Moanin’ At Midnight and How Many More Years. Others followed, including Who Will Be Next, Smokestack Lighting and I Asked For Water (She Gave Me Gasoline) – all of which made the Billboard national R&B charts. Moanin’ In The Moonlight (a collection of all the above singles and more) was released in 1959. His relationship with songwriter Wille Dixon was to produce some of his most famous recordings, albeit they didn’t achieve a high degree of commercial success or air play at the time. These included Spoonful, Little Red Rooster, I Ain’t Superstitious and Killing Floor. Wolf’s second album, Howlin’ Wolf, (again a compilation of singles) was released in 1962.

Even though commercially, Wolf’s career was on the decline, he remained a major influence on the new generation of white blues players. Tours to Europe, appearances with The Rolling Stones and recordings with younger musicians such as Eric Clapton, Bill Wyman and Stevie Winwood cemented his reputation, especially with non-American audiences. Some of these projects were successful and others ill-conceived. Nonetheless Wolf remains today one of the most influential of a small number of post-war Chicago bluesmen. He died 10 January 1976 as a result of irreparable damage caused to his kidneys following a road traffic accident in 1971. He continued to record and work up to his death but in a much more restrained way. His last live performance was with B.B. King, approximately two months before his death.

The original 1959 version of this LP had 12 tracks whereas this edition has been supplemented with four bonus tracks (Rockin’ Daddy, Going Back Home, I’ll Be Around and So Glad). There is also a bonus CD containing the complete original album plus 15 more tracks. A nice touch but there are plenty of Wolf’s “greatest hits” CDs out there and it somehow defeats the idea of a vinyl collector’s edition! The original liner notes by Paul Ackerman are included and the quality of the recording is very good.

If I were building up a vinyl collection from scratch, or I simply wanted to supplement what I already had on CD, this album would be very high on my list. There is certainly something about vinyl that brings Wolf’s music to life better than CD. The hyperbolic and often inappropriate “iconic” and “legendary” are frequently overused in the music industry – but perhaps not on this occasion.

Thomas Fletcher - 19 November 2021
The River Doesn’t Like Strangers is the debut signing to Shabaka Hutchings’ new label Native Rebel Recordings. Saxophonist Carmichael grew up in Warrington before moving to south-east London where...