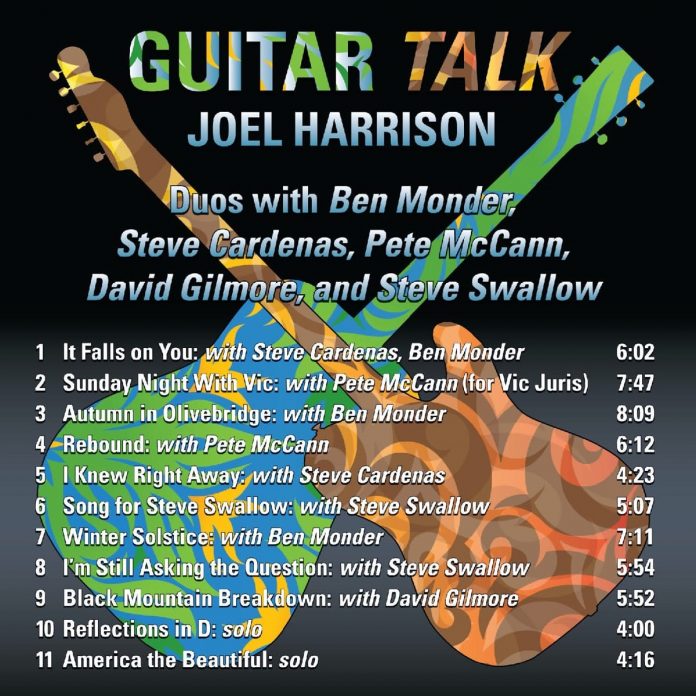 In contrast to his 2019 large-ensemble release America at War, Joel Harrison’s latest offering opts for a stripped down, 11-track collection on which the American Guitar Summit founder is joined by several New York jazz stalwarts for a series of short and simple instrumentals.

The conversation opens with the dreamy It Falls On You, on which Harrison teams up with New York-based guitar picker Steve Cardenas (Joey Baron, Charlie Haden, Ben Allison, Madeleine Peyroux, Norah Jones) and fellow Big Apple guitarist Ben Monder, who has worked with Bill McHenry, Theo Bleckman, Marc Johnson, Toots Thielemans and David Bowie. Both have released numerous albums as leader. Cardenas turns up again on the equally pensive I Knew Right Away, while Monder can also be heard on the fussy fusion of Autumn In Olivebridge, and the minor runs and high tinkling notes of Winter Solstice.

Guitar Talk closes with two solos from Harrison: Duke Ellington’s Reflections In D, and an entrancing take on the patriotic anthem America The Beautiful, which includes sudden, intriguing experimental sounds including power chords. The first is lovely in places but never seems to get off the ground – which can be said of several of the ambient tunes here – the second is simply scintillating.

While those who appreciate free-form experimental improvisation will certainly find a home in this ethereal set, more casual listeners may feel there is not sufficient variety or form here. Nevertheless, the instrumentation is of the highest standard and may set a new benchmark for this style of music.

Note: Harrison’s guitar can be heard through the left channel.

Derek Ansell - 14 April 2020
Here’s something the jazz enthusiasts and collectors will love: a box set of the complete Charlie Parker 1940s Savoy records on four 10” LPs, facsimiles of the original 1940s...