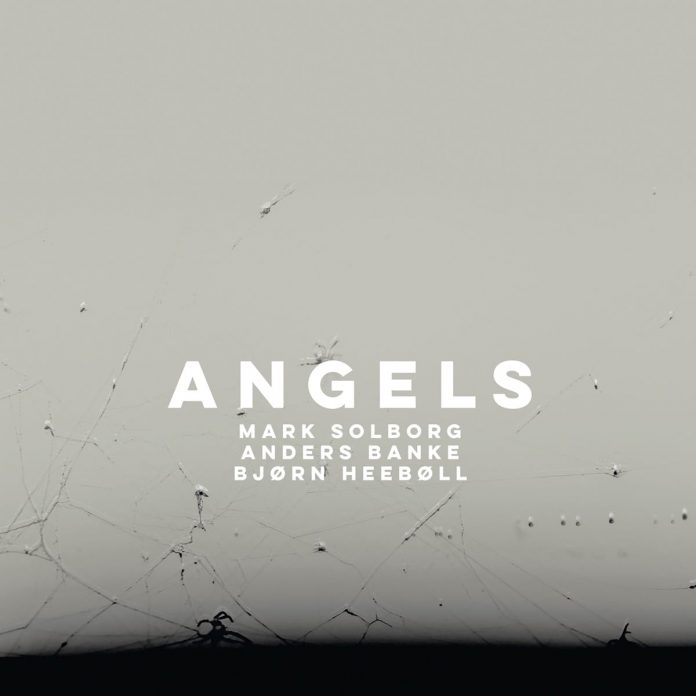 Mark Solborg has been one of my revelations of 2021, and Ian Lomax’s recent JJ review of the extraordinary Tungemal I & II nicely describes the Danish/Argentinian guitarist’s unique philosophy and approach. He has been active since the early 2000s and his regular collaborators have included Herb Robertson, Evan Parker, Simon Toldam and Axel Dörner. While no two recordings are ever truly alike, Solborg’s ongoing relationship with Banke and Heebøll has been something of a constant.

For listeners who perhaps found Tungemal a little difficult to penetrate, Angels affords the opportunity to hear Solborg performing in a more familiar context. Solidly in the tradition of Motian, Frisell and Lovano, the trio’s emphasis on melody and loose-fit relationship to form is by now almost mainstream.

More surprising perhaps is Solborg’s decision to bring in four compositions from outside of the band – in addition to the Ayler-penned title-track there are fresh interpretations of Monk’s Misterioso (Mr. Y Oso) and Crepuscule With Nellie, and the wonderfully autumnal reading of Nick Drake’s enigmatic Harvest Breed which brings the set to a close.

Opening with the spare and very Motian-esque Den 7. Dag, the three musicians spin intersecting webs, and as the piece gathers momentum a common narrative quickly takes hold. Rigors Remain is rather more urgent, its angular theme eventually giving way to playful improvised counterpoint. Banke’s bass clarinet on Early Morning Bells brings echoes of John Surman’s great 80s ECM quartets with Paul Bley, Frisell and Motian, while the first of the two Monk covers is hard-edged and rocking, a rude shock after the decidedly pastoral airs of the opening three tracks.

As if to further confound expectations, Another Bastard offers some of the set’s most tender writing, and although the cool rendition of Angels is surprisingly pensive and elegiac, it has a latent power which lingers long after the final note has decayed.

Complex yet readily accessible, Angels is an object lesson in the art of conversational chamber improv.

Brian Payne - 10 June 2020
I’d not come across trombonist Klas Jervfors Turner until I heard this CD. On first listening I thought I must have been missing something - it’s that good. I...