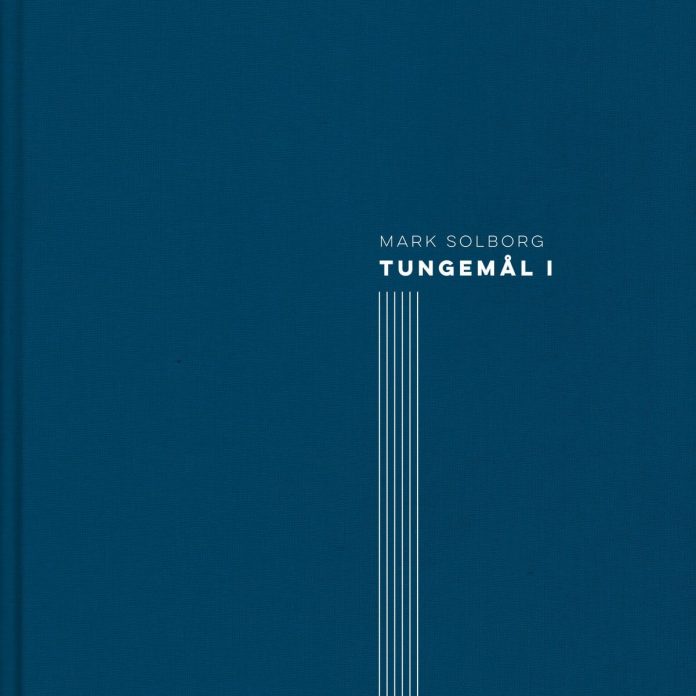 Very occasionally a CD will pass my way which I have difficulty in reviewing. Not because I don’t care for the music or the genre; but because it defies conventional description. Tungemal I + II are two such albums. The two albums (three CDs, to be precise) are each released independently albeit simultaneously. Each album is designed to support and complement the other but capable of independent listening; and each comes with a beautiful hardback book in lieu of liner notes. Unique would be an understatement.

Let’s start with some basics. Tungemal means tongue or language in Danish. To Danish-Argentinian guitarist Solborg it means a sonic and musical language. An investigation of the instrument and spatial topography of the guitar, “the electrified guitar in an acoustic landscape”, Tungemal is an ambitous project that took three years to complete. Volume I is a solo album featuring Solborg on both electric and semi-acoustic guitars. On volume 2 (a double CD), Solborg is joined by Simon Toldam on piano and Francesco Bigoni and Lars Greve on a variety of woodwinds.

Solborg is no stranger to experimentation having been involved in a number of unusual and chamber-like ensembles, without bass or drums. He has worked solo as well as collaborating with other key artists and inventors in the field of modern music such as Evan Parker, Herb Robertson, Lotte Ankers and others. Innovation, experimentation and individual interpretation are the essence of Solborg’s music to date.

Tungemal focuses on his fascination with “the guitar as a musical voice, the soundbox on the body and the physical contact with the strings”. He experiments not only with the technique of playing – using different picks and bottlenecks to all sorts of kitchen hardware including plastic strips and alligator clips – but with the impact that amplification and environment has on that voice. Whilst a normal, warm tube-guitar amplifier is used, this is played through a variety of satellite speakers from low-quality to high-end monitors. The book that accompanies this first album actually contains illustrated diagrams of the various setups used. The 19 tracks on volume I are catalogued into categories relating to the material and/or techniques involved. Some tracks combine content or techniques and can be related to more than one category. The categories are conversations, strings and fingers, songs, preparations and devices and pitch. Each category is allocated a unique icon to be attached to the appropriate track listing.

Tungemal II is very different again. The addition of piano and woodwinds gives Solborg’s music a completely new identity. During the course of three sessions at The Village Studios, Copenhagen the musicians worked with written material, improvisations and the Tungemal “spacial-concept” in constellations of three duos and one trio. Once again, Solborg recorded the album utilising a variety of multiple microphone and speaker configurations. The sessions build on the techniques and approaches derived from the solo sessions on volume I, but now interacting with acoustic instruments in a chamber-style approach. As with the book that accompanies the first volume, the second book contributes a form of visual and written mapping.

What were Solborg’s ambitions for this project? His reply is that “with this project I hoped to contribute … new music of today. It can be naïve, poetic, abstract, fragile, complex, filled with energy and much more. As long as it holds musical presence … and says something about the frightening and beautiful world we live in.” He adds that whether or not he has accomplished these aims is for others to decide.

That, I might add, is far from straightforward. How you view these albums will depend on what you expected. This is not jazz in any conventional sense that I know (and that includes all the more extreme sub-genres) and it is certainly not easy listening. Yes, it resembles chamber music in its antecedents but without any classical rules. It is intense, challenging, off the scale (quite literally sometimes), acoustically provocative and thought provoking. At times the music is delicately gentle, ephemeral and harmonious; and at other times it is fractured, tormented and troubled.

The project is beautifully crafted with passion, love and creativity and the listener is constantly rewarded by surprise and the unexpected juxtaposition of sounds, instruments and space. The overall effect, however, is just too complex and difficult to sum up in a few words. I am sure Solborg must have thought the same which is why he has presumably written two accompanying hardback books.

My own thoughts are that this project is simply too big to describe as an album release. It is a work of art and would easily justify space in any contemporary art gallery as a “sound and visual” installation. It is quite unlike anything I have had to review before. The buying format is also quite unique. Purchasers of just the books can download the music using QR codes; whilst conventional CD purchases include the relevant book.

Leon Nock - 08 March 2021
It’s rare to come across an album in which Joni Mitchell cosies up to Cole Porter and Jerome Kern (at least on my block) and it’s even rarer to...