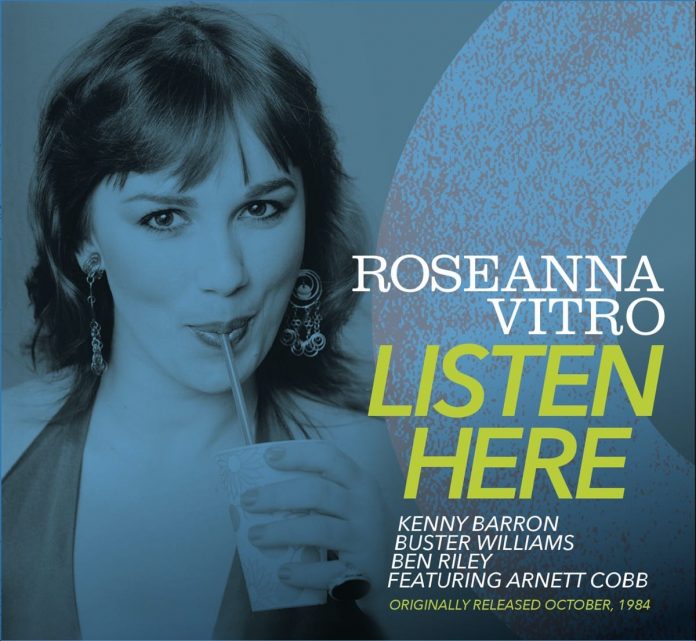 This reissue of Roseanna Vitro’s debut album is very welcome. It’s hard to accept that the original release was almost 40 years ago and even harder to grasp is the fact that the singer is now a grandmother. As she says, “I think these early recordings stand the test of time, and I want to introduce them to a new generation.”

During the intervening years, Vitro built an international career, playing clubs, concerts and festivals and recording extensively. Hearing this album again, it is striking that the 20-something singer she was then fits in so comfortably with front-rank instrumentalists, notably the Kenny Barron Trio and Arnett Cobb. In her earliest years, Vitro had spent some time in Houston, which is where she met Cobb, who became her mentor. Vitro and Cobb renew their acquaintance here on Centerpiece and It Could Happen To You.

In some ways, the repertoire chosen for Vitro’s debut mirrored what was to follow in her career. All the songs are familiar to jazz audiences, among them standards, jazz tunes and Latin music, while Black Coffee is given a rousing bluesy treatment.

Vitro’s approach to all these songs is confident and displays her understanding of the intentions of the writers. A couple of decades ago, summarising her approach to her repertoire in The Encyclopedia Of Popular Music, I wrote: “Swinging with seemingly effortless ease, she always seeks and finds the emotional depths of the lyrics and music she performs.” That summary still applies. Never overstated and always understanding, her interpretations are exemplary. Her accompanists are all in fine form, Barron having many fine solo moments.

Warmly recommended to those who missed its first release and to newcomers unfamiliar with Vitro’s work. She certainly has stood the test of time.

Steve Voce - 02 March 2021
While Jimmie Noone belonged in the upper echelons of the New Orleans clarinet dynasty and might have seemed sophisticated in comparison with, say, Johnny Dodds, he was in fact...