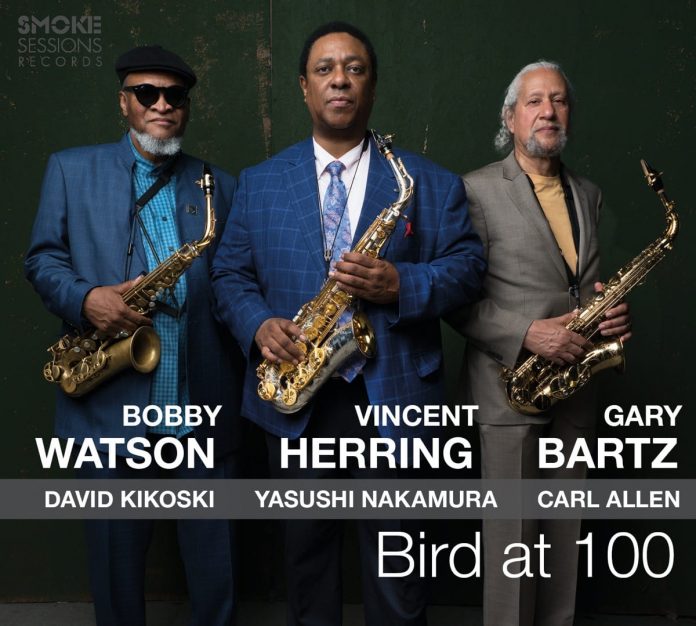 August 2020 saw the 100th anniversary of the birth of Charlie Parker. By then he had been dead for more than 65 years but he remains hugely influential, directly or indirectly. As Miles Davis once said, the history of jazz can be summed up in four words: “Louis Armstrong, Charlie Parker”.

None of this trio of distinguished alto players copies Parker, but he is there in spirit. As Herring, whose idea the session was, says, “We certainly take in other influences as well, and of course we all hope to put our own stamp on it, but Bird is always there through his vocabulary and his way of interpreting the music.”

The set list includes Parker originals, standards he recorded and new compositions written in tribute to him: Watson’s Bird-ish (based on Parker’s Confirmation), Herring’s Folklore and Bird Lives by Jackie McLean, who was one of Parker’s protégés. (On occasion, when Bird’s horn was in hock, McLean would generously lend him his own alto.)

Overall the music here embraces bebop, hard bop, some later developments and timeless lyricism. This mix is especially evident on Herring’s impassioned feature, Lover Man, a tune associated with a crisis in Parker’s life that led to a stay in a psychiatric hospital. Herring brings out the beauty of the tune whilst recalling, consciously I guess, Parker’s angst. The other ballads spotlight Watson on These Foolish Things and Bartz on April In Paris.

The often ferocious tempi of bebop is especially represented in the 10-minute workout on The Hymn, which hurtles along like a reckless driver on a mountain road. The more relaxed end of the spectrum follows with a gorgeous version of These Foolish Things, which Watson concludes by “doing a Sonny Rollins” in a sinuous coda that slots in quotes from Rollins’s Alfie’s Theme and Bacharach & David’s What The World Needs Now.

The rhythm section, regular partners with Herring, provide exemplary support throughout, not least on the perilous uptempo tracks. Altogether, another corker from the Smoke Session stable.

John White - 10 January 2022
The latest reincarnation of “The Count Basie Orchestra” (CBO) has considerable merits, but minus Basie himself is rather like “The Marx Brothers” minus Groucho – not quite authentic. Under...