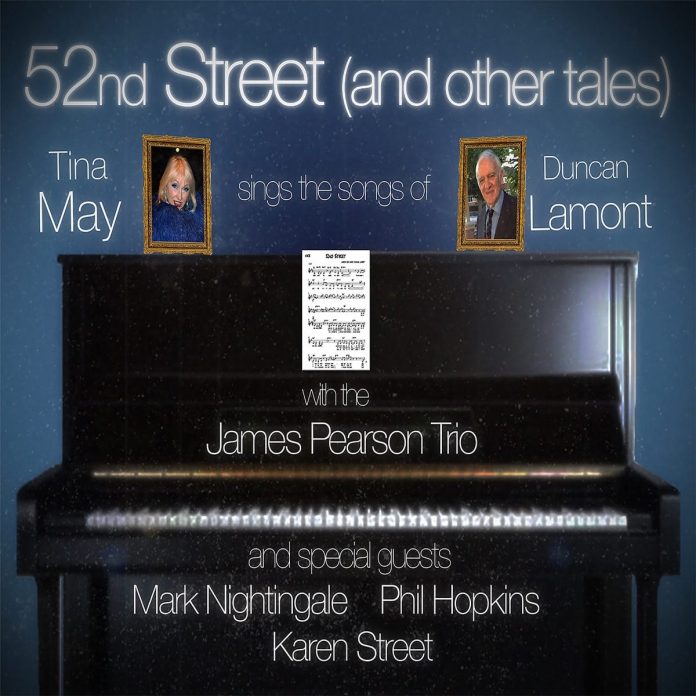 For some time, Tina May has been regarded as one of the UK’s finest vocalists and there is very little on this CD to make a case otherwise, for her considerable credentials are spread widely over these 13 tracks.

Back in October 2020, Leon Nock reported for JJ on a live stream the vocalist (plus pianist James Pearson) had made, covering the Duncan Lamont material assembled here. He commented on a degree of quirkiness contained in the lyrics, which is probably why they had an attraction for the late Blossom Dearie back in the day.

The highly respected Lamont died in 2019 having been a mainstay of the British scene for many decades, more noted for his saxophone playing than his compositions, although both those strings to his bow took him into some pretty exalted company during a distinguished career. For instance, the accompanying booklet shows him rubbing shoulders with Eartha Kitt and Frank Sinatra.

Apart from the cutesy nature of Spring Song and Camille, the latter delivered with a cod French accent, there is much for the listener to enjoy, from Hymn To Jobim, a lament written at the passing of Antonio Carlos Jobim to the contradictory two-part closer celebrating the blues, both delivered with assurance by the singer. If one track is more recognisable than the rest it’s probably The Algonquin Hotel, the lyrics making reference to the famed Round Table which included writer Dorothy Parker.

May is totally at home with the aforementioned quirkiness at whatever tempo, her professionalism and alacrity evident at every turn, with the poignancy inherent in The Darker Side Of The Rainbow bringing out her understanding of a lyric’s demands.

Final words should be devoted to the complementary contributions of trombonist Nightingale and Ronnie Scott’s artistic director James Pearson on piano, who add a little colour where necessary.

Derek Ansell - 04 March 2021
This collection gathers all the music performed by Parker and Navarro at Birdland. The whole of CD1 and the first track of CD2 feature an ideal quintet with Bud...