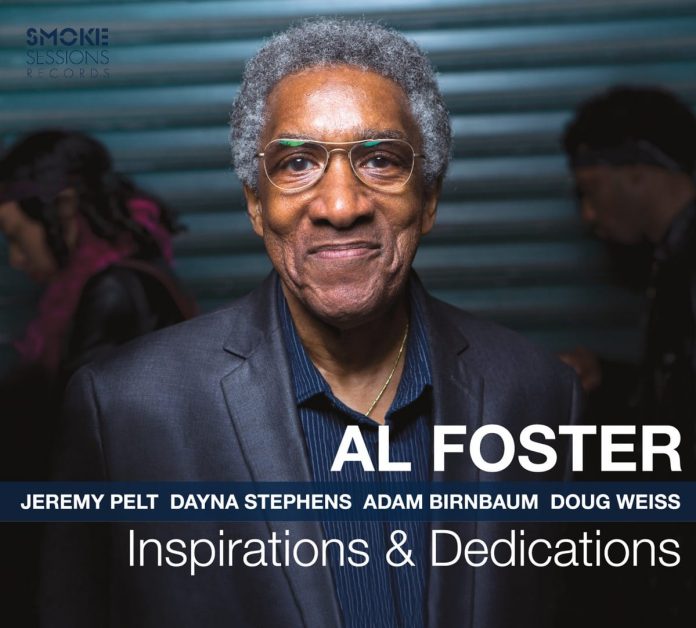 Watching a bunch of clips the Smoke label uploaded of Al Foster’s band playing tracks from this album is evidence of just how dynamic a player he’s remained, 57 years on from making his big recording debut, aged 20, with trumpeter Blue Mitchell.

The clips show the now 78 year-old, baseball-capped drummer full of energy, flipping from the kind of raw, tappy swing rhythms he brought to Mitchell’s music and the baggy, hi-hat hissing funk grooves he played with Miles Davis in the 1970s. His approach and feel is unique: utilising sticks, brushes, even his hands and forearms, to drive or dampen the sound of the drums, he pushes forward the sonic and rhythmic possibilities of the music. Saxophonist Danya Stephens sums up Foster’s feel perfectly in the record’s liner notes. She enthuses he has “what all masters have, a loose precision” and that’s faultlessly what you hear at once in Foster’s playing, whatever the musical situation.

Of course, Foster has spent most of his playing life in the company of the masters (Sonny Rollins, Dexter Gordon, Donald Byrd, Joe Henderson, McCoy Tyner, Herbie Hancock, Miles Davis) and has also led some impressive, mostly acoustic, bands of his own over the years. Alongside a soulful Stephens, the group on Inspirations And Dedications is made up of long-term bassist Doug Weiss, pianist Adam Birnbaum and trumpeter Jeremy Pelt and the set is, as it’s title suggests, a collection of original pieces dedicated to family members (composed by Foster) bookended by two tracks (Cantaloupe Island and Jean-Pierre) inspired by composers Foster has extensively worked with (Hancock and Davis respectively).

Cantaloupe opens with a rolling piano figure that builds to the tune’s familiar funky riff. Here, Throughout Foster lends a light, breezy beat marked with snare accents and his part intensifies through some strong bluesy playing from Stephens, Pelt and Birnbaum, whose rhythmically challenging solo brings out some great moments from Foster. Birnbaum also brings plenty of umph to Ohh, What You Do Me, which he introduces with an odd-metered, Monk-like figure before it fans out into a funk tune in four. Along with the samba ballad, Bonnie Rose, the piece is a dedication to Foster’s wife and it’s groove and split-horn riffing make it an early highlight here.

The set continues with a string of dedications to Foster’s daughters and the band bouncing through 6/8 swing, trumpet-led Latin and a brush-swept-ballad for Simone’s Dance, Samba De Michelle and Kierra respectively. Tracks such as Jazzon and Aloysius conjure up the cool-era style while the laid-back swinger Douglas – dedicated to bassist Doug Weiss – brings to mind the seminal 60s style of the Jazz Messengers. With the bass growling low under a beautifully intertwined trumpet and saxophone melody, it has that same slickness and charm. Foster’s snappy shuffle pattern and playfulness around the toms too echo a distinct influence of Art Blakey.

Brandyn, a track which first appeared as No Title on Foster’s 1997 record Brandyn, is stripped down here to just piano and Foster providing scratchy cymbals, tom-toms and the light clicking sticks. In fact, it’s noticeable after a few plays that the whole record rolls along in a mostly calm, sparse manner. Even the typically hard-hitting late-80s live Miles favourite Jean Pierre manages to really hit its stride minus the usual pop-slap bass and electric guitar, thanks to Foster’s signature groove for the tune and Pelt portraying perfectly the man with the muted horn.