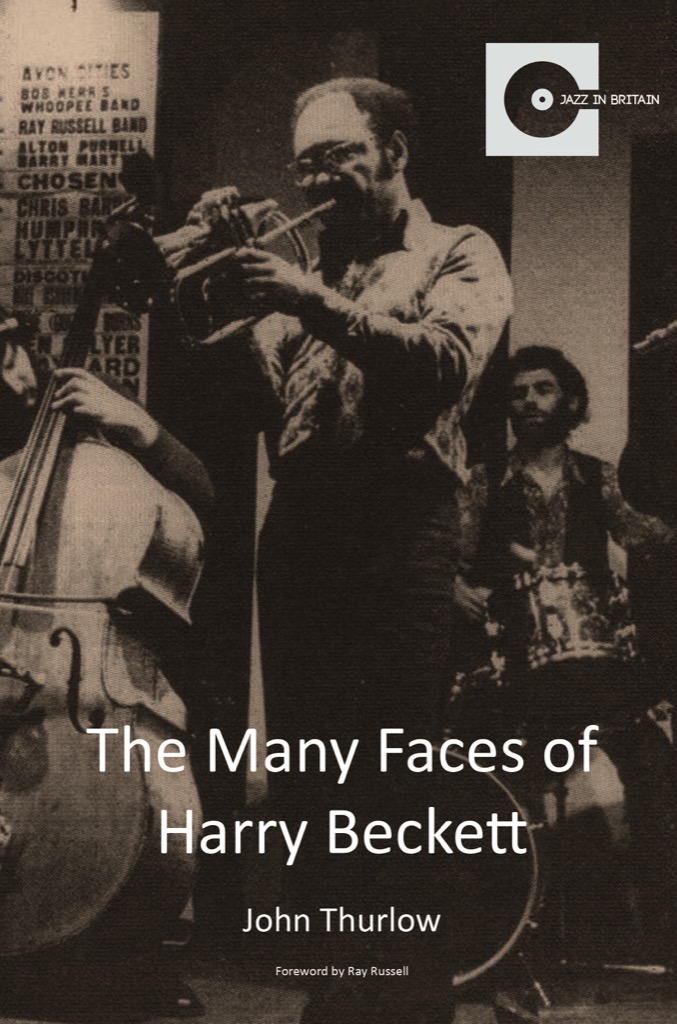 Joy Unlimited was the name of one of the bands led by the great Barbados-born trumpeter and flugelhornist Harry Beckett, and one of his album titles. And “joy unlimited” is how I feel about the publication of this book celebrating the life of this wonderful musician.

Harry did indeed spread joy, for as his long-time collaborator guitarist Ray Russell says in his foreword to John Thurlow’s book: “We all loved Harry, ‘The man with the smile’. He was infectious, his sonic signature was all embracing, and to be part of the soundscapes he provided can only be counted as a privilege”.

And what glorious soundscapes abounded in the long career of this powerfully original player, whose talents lit up the creations of many ensembles – from the early small-group collaborations with bassist and composer Graham Collier to the jazz orchestras of composers including Mike Gibbs and Mike Westbrook, and of course his own distinctive bands.

…his association with Mingus was purely for the soundtrack for the 1961 film All Night Long. This led Harry to be featured on screen in a nightclub band. ‘The director told me I had a beautiful head’

Harry lit up my life in a big way, too, when he joined the contemporary group Pulse – in which I played tenor – initially being featured with the band for a Midlands tour in 1980. It was the start of a long association, and Harry always stayed at my house when we were on short tours of the North and the Midlands, plus many single dates in the regions, usually alongside the versatile Maggie Nicols singing straightahead rather than the free-improvising style for which she is generally known. He became a great friend of my family, as well as an inspiring musical associate, and even if we had no upcoming gigs on the books he would often just ring up for a chat, always with that great chuckle in his voice.

My collaboration with him – tours and gigs, plus one LP (Stormy Weather) and a commercial-radio session – was a very minor one indeed in Harry’s career. But what a privilege it was.

John Thurlow’s book is enriched by valuable insights from Harry’s regular musical associates and close friends, particularly Ray Russell and trumpeter Chris Batchelor, and the author also quotes extensively from my own taped interviews with Harry, parts of which were published in a feature on his work in Jazz Journal in 2007.

What comes across strongly is a comprehensive picture of a totally dedicated musician, always professional in his approach to the music business, always aiming to build on his technique and finding fresh areas of improvising to explore. At the same time, as I can testify, he was also a fun guy to be around, just glowing with human warmth and consideration for others. And this is very clear in Thurlow’s chapters, beginning with Harry’s early musical experiences with a Salvation Army band in Barbados, and his decision to emigrate and make a professional career based in London. From nightclub work, he progressed to more creative engagements, and the rest is jazz history. His work with Graham Collier Music brought him widespread acclaim, and Collier began to bill him as a featured artist on concert posters and album covers.

Harry went on to lead several brilliant bands of his own, including Joy Unlimited and the S&R Powerhouse Section. “The S&R title used to puzzle people”, Harry once told me. “But it just meant Saxes and Rhythm.” His albums as a leader represent, of course, his most personal musical statements and were a platform for his countless superb compositions.

Several myths are demolished by Thurlow’s dedicated research, among them the legend that Harry was for a time a member of the band of bass legend Charles Mingus, something never claimed by the trumpeter. In fact, his association with Mingus was purely for the soundtrack for the 1961 film All Night Long. This led Harry to be featured on screen in a nightclub band. “The director told me I had a beautiful head”, he once told me. Harry thought that was hilarious.

His international work – touring and recording – is extensively covered in the book, with a huge number of ensembles in Europe and also in the USA and Canada with American saxophonist John Tchicai.

It also explores his work outside the world of contemporary jazz, from bluesman Keef Hartley to “dub” artist Jah Wobble, for Harry was indeed versatile, and – astonishingly – he played until just a few weeks before his death in 2010 at the age of 87.

There are some minor flaws in the text, usually where Thurlow has quoted directly from various publications, but overall this is a hugely valuable work, full of fascinating insights and entertaining tales, and with a comprehensive discography. It’s a must-have for everyone who loved Harry and his music.