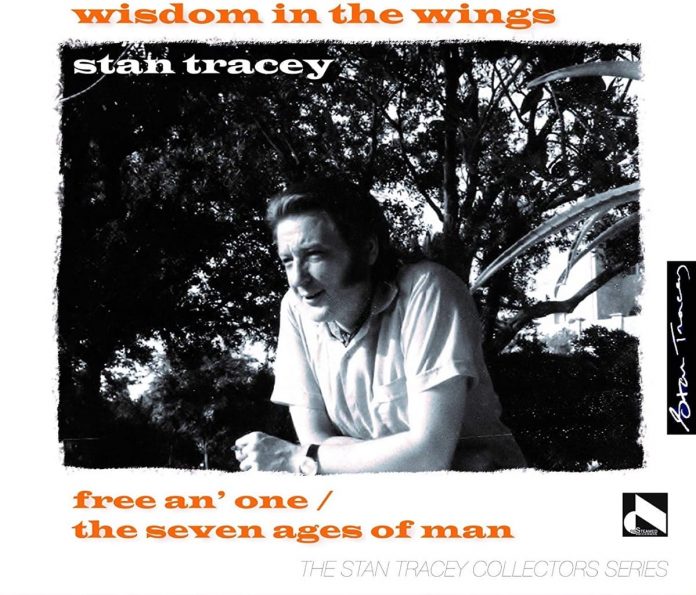 Recorded in the autumn of 1969, these two albums, Free An’ One (quartet) and The Seven Ages Of Man (big band) were released the following year but soon became unavailable and were sought after for many years. They came at a time when mainstream/modern jazz was under attack from both free-form jazz and jazz-rock, and these could be seen as how Stan Tracey responded to this. As the pianist explained in the liner notes to Free An’ One, when asked if anything was written down in advance: “No, we just started playing. But we felt free to drift into a set sequence like the blues or ‘I Got Rhythm’ at any time. And we always drifted out of it again.”

The long track on CD1, Free An’ One, epitomises this. The musicians were given a free hand and responded accordingly, interacting and pushing it forward, although Tracey, and to a certain extent altoist Peter King, clearly pulls it back into familiar territory when necessary. It helped that the musicians were at ease with each other; although Bryan Spring was a newcomer, Dave Green had been playing with Tracey for over a year and King, who plays beautifully, was firmly rooted in bop. Their interplay and musical conversation, ebbing and flowing, is particularly evident on Nudgy Vamp.

The Seven Ages Of Man was recorded the following month and it shows the way Tracey was starting to think how further improvisation could be included within the structure (and strictures) of a big band.

Tracey’s piano introduces the opener, disguising its direction, but when the full band arrives, no doubts – a full force of energetic and exciting music, driven by a propulsive rhythm section; Skidmore’s solo, showing clear intention of incorporating freer elements, and the clarity of the brass, trumpets in particular, give a tantalising indication of what this band could have been like live.

The tracks loosely follow Shakespeare’s Seven Ages, described by Jaques in As You Like It. Some relate more than others – the slower Enter Romeo, the “lover sighing … with a woeful ballad made to his mistress’ eyebrow”; Ricotti’s vibes on Panto’ Panta reflecting the slightly comic figure of Pantalone, the weak old man, soft tones in contrast against the barrage of the band.

Inevitably there are the glimpses of Ellingtonia, not only in the rich ensemble work, but also in the soloing of Tony Coe (on clarinet and in his deceptively lazy Paul Gonsalves inflected tenor work), the baritone of Ronnie Ross on Kindly Leave The Stage and Tracey’s own introduction to this track.

It’s not the Dukish suite-orientated format, however, with highly defined tempo changes, but more the shifting moods and the solos. Coe’s inventive and agile clarinet on Matinee Days is a treat, insinuating itself through ascending and descending arpeggios, showing, like Skidmore earlier, how a freer approach can be accommodated into the context of a big band – soon after to be examined in Tracey’s more experimental Tentacles.

There’s talk of more from this period of Stan Tracey’s music, so all credit to Clark Tracey for making it happen.

Matthew Wright - 27 May 2019
On first inspection this recording could be seen as slightly outside the remit of JJ but as it is broadly a mix of traditional tango with elements of jazz...