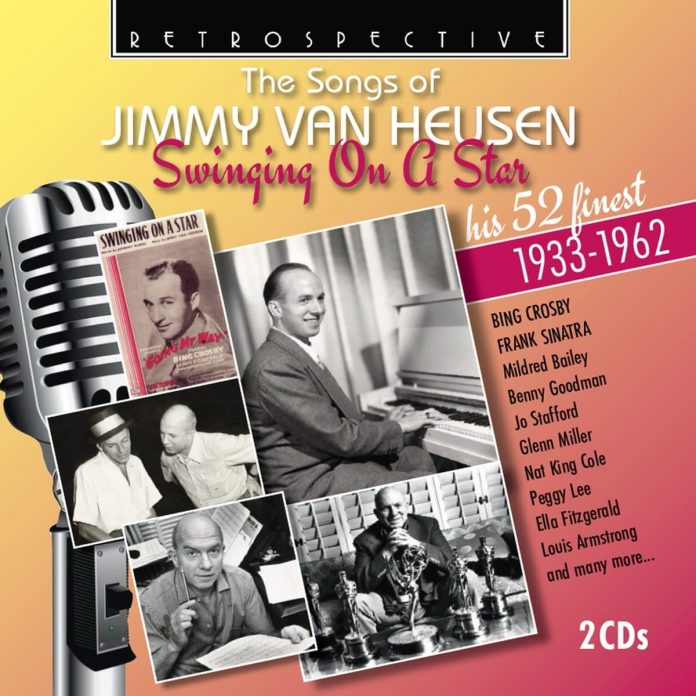 By coincidence this CD landed on my doormat just days after I streamed pianist/vocalist Chris Ingham performing an evening of Van Heusen from his living room in Suffolk. Chris was, of course, so to speak, outgunned by Retrospective, who have at their disposal the cream of vocal and instrumental talent.

They are able to list 10 heavy-hitters on the cover before adding truthfully “and many more”, whilst Chris was limited to 88 of Yamaha’s finest keys, one pair of hands, a voice and whatever charisma he could scare up; I can only add diplomatically that I enjoyed both experiences.

Having devoted a lifetime – minus the first 10 years – to an in-depth study of what we have now been trained to refer to as “The Great American Songbook”, I’m now known around these parts as the go-to smart-ass; if you want and/or need to know that Sammy Cahn’s first long-time collaborator Jule Styne wrote a song called All The Way in 1943 with lyrics by Kim Gannon long before Sammy Cahn wrote an Oscar-winning song in 1957 also called All The Way with Jimmy Van Heusen then I’m the snitch who will mark your card.

With a CV like this imagine my chagrin when I discovered via this CD that Van Heusen (né Edward Chester Babcock) was active a good five years earlier than I had supposed. I had him emerging on to the popular music scene in 1938 with Deep In A Dream when in fact this very album offers There’s A House In Harlem For Sale, recorded by trumpeter Red Allen with Buster Bailey on clarinet in 1933.

Adding insult to injury it also goes on to note that with lyricist Sammy Gallup, and under a John Doe, he also composed Somewhere Along The Way, a single which gave Nat King Cole a popular hit – and I speak as one who actually bought it, albeit in complete ignorance. Seems what they say is true – nobody loves a smart-ass.

It is, therefore, a more reflective reviewer who takes it from here. Van Heusen is somewhat unique inasmuch as with the help of two long-time collaborators, Johnny Burke and Sammy Cahn, he supplied the bulk of material for Bing Crosby in the 40s and Frank Sinatra in the 50s and 60s. Not unnaturally these two vocalists get the lion’s share of this double CD. But worry not, there is modest needle time for the likes of Johnny Mercer, Jo Stafford, Peggy Lee, Louis Armstrong, Mildred Bailey, Dinah Shore and others.

All in all this is a fine album, four stars going away and I’m delighted to add it to my shelves.

Discography
CD1: Swinging On A Star; There’s A House In Harlem For Sale; It’s The Dreamer In Me; So Help Me If I Don’t Love You; Do You Wanna Jump,Children?; Deep In A Dream; Good For Nothing But Love; Heaven Can Wait; Oh, You Crazy Moon; Blue Rain; I Thought About You; Darn That Dream; Peace, Brother; Imagination; Shake Down The Stars; Polka Dots And Moonbeams; All This And Heaven Too; It’s Always You; Absent Minded Moon; Road To Morocco; Moonlight Becomes You; Sunday; Monday, Or Always; If You Please; It Could Happen To You; Nancy With The Laughing Face; Put It There, Pal (77.47)
CD2: Sleigh Ride In July; Like Someone In Love; Yahta, Yahta, Talk, Talk, Talk; Personality; Aren’t You Glad You’re You; But Beautiful; You Don’t Have To Know The Language; Busy Doing Nothing; Once And For Always; Sunshine Cake; Life Is So Peculiar; Somewhere Along The Way; Here’s That Rainy Day; Love And Marriage; Love Is The Tender Trap; All The Way; Come Fly With Me; It’s Nice To Go Travelling; Fancy Meeting You Here; To Love And Be Loved; High Hopes; All My Tomorrows; Ain’t That A Kick In The Head; Incurable Romantic; The Second Time Around; Call Me Irresponsible (78.50)
Various artists, locations and dates.
Retrospective 4380

Derek Ansell - 08 October 2021
The music on this LP consists of 11 originals of varying lengths written by members of the trio. It begins though with a reflective solo piano recital by Lasse...