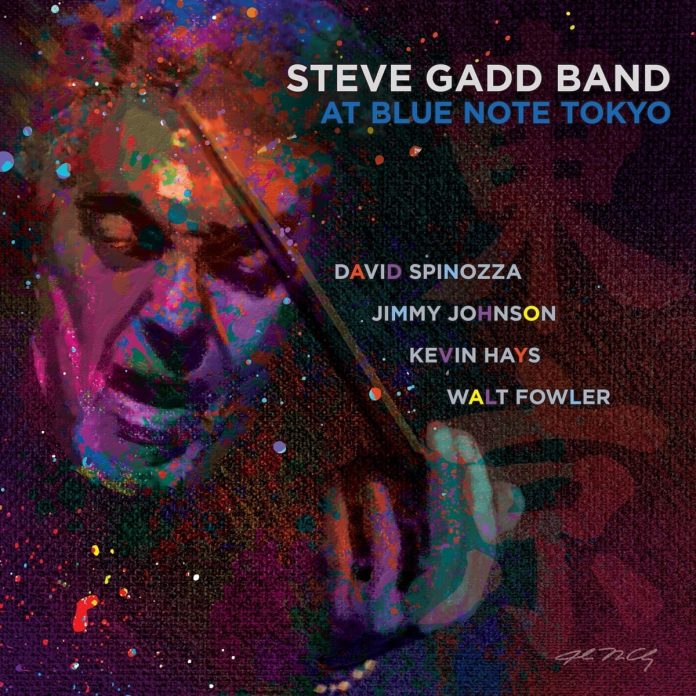 Jazz drum legend Steve Gadd releases his latest album with the Steve Gadd Band, a live show recorded in Tokyo at the end of 2019. The band’s self-titled 2018 album won the Best Contemporary Instrumental award at the Grammys the following year, and At The Blue Note Tokyo features a selection of its tracks.

The band also draw from elsewhere in Gadd’s career such as his time with L’Image, originally together in the 1970s and featuring Mike Mainieri, Warren Bernhardt, and Tony Levin. They released their first album in 2009, titled 2.0, joined by guitarist David Spinozza, who also features on At The Blue Note Tokyo, replacing usual Steve Gadd Band member Michael Landau.

The first track, Where’s Earth? progresses in a laidback, grooving fashion, leaving plenty of room for improvisation. Gadd remains relatively quiet, with a tasteful, steady rhythm, and this sets the tone for the rest of the album.

Whether on bluesy tracks Doesn’t She Know By Now and Hidden Drive, the bossa nova-style Timpanogos or the funky Way Back Home, Gadd sticks to reserved and modest patterns and fills. Conversely, the other musicians are given room to stand out, and it is a testament to Gadd that he is able to lead an ensemble and not take centre stage in all of its songs.

The final track is a cover of Bob Dylan’s Watching The River Flow, with Kevin Hays on vocals, and a light shuffle from Gadd, which is in keeping with the bluesy atmosphere of much of the album. Overall, At The Blue Note Tokyo is an enjoyable listen, and well suited to any fans of Gadd, especially his recent work.

Dave Gelly - 07 November 2021
Even though they must have spent hundreds of hours performing and exchanging banter on Crosby's radio and television shows over at least a couple of decades, this is the...