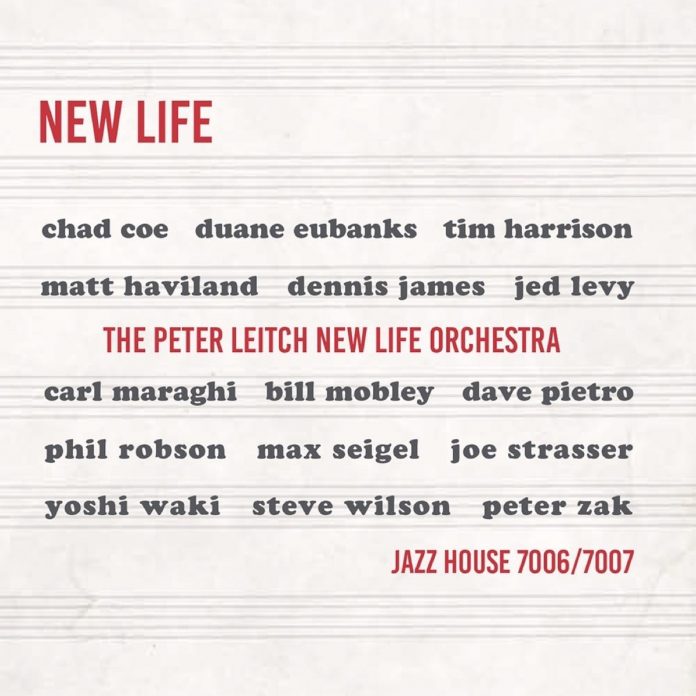 Canadian jazz musician Peter Leitch has recorded and performed with an array of well-known names, such as Oscar Peterson and Milt Jackson, as well as leading on over a dozen albums. Having given up playing the guitar due to health issues, Leitch instead composes and arranges, and now releases a two-disc album of his own 15-piece orchestra, and the product of two years writing.

The first disc starts with Mood For Max, which Leitch dedicates to his doctor. It is a complex piece with flute and horn section melody in an upbeat tempo, with excellent trumpet, saxophone and piano solos in the middle.

Into the second track, Portrait Of Sylvia, the atmosphere shifts with a more open, laidback arrangement and the woodwinds and acoustic guitar hinting toward bossa nova. Leitch’s use of the orchestra is brilliant, in particular the subtle way the dynamics are used to create rich, swelling harmonies.

Of the 17 tracks, there are only two covers, the first of these being the fifth track, ’Round Midnight. British Phil Robson starts the piece on warm electric guitar, and Leitch stays true to the slow melancholy of the original, and with a captivating orchestral arrangement.

As the liner notes state, the album’s two discs are designed to mirror the two sets a group would play in a club. The second disc opens with Exhilaration, another fast, complex piece, with fantastic drumming from Joe Strasser. Track five, The Minister’s Son, is written by saxophonist and flautist Jed Levy, and is led by the woodwinds with a catchy melody and an immensely dense horn-section harmony.

The second disc also contains the remaining cover,  Richard Rodgers and Lorenz Hart’s standard Spring Is Here, which has been recorded by a huge number of musicians over the more than 80s years since it was written. Leitch’s version begins with an extended intro from Peter Zak on piano, before being joined by Leitch’s gentle and reserved orchestration.

Suitable for those interested in contemporary as well as traditional jazz, Peter Leitch’s New Life is brilliant, the work of someone with a very clear musical vision, and the skill and ability to manifest it.

Sarah Pierce - 28 April 2021
Not just an album, but a story; not just a story, but a call for action, Joseph Herbst’s album is a hybrid between a jazz album, a programmatic piece,...