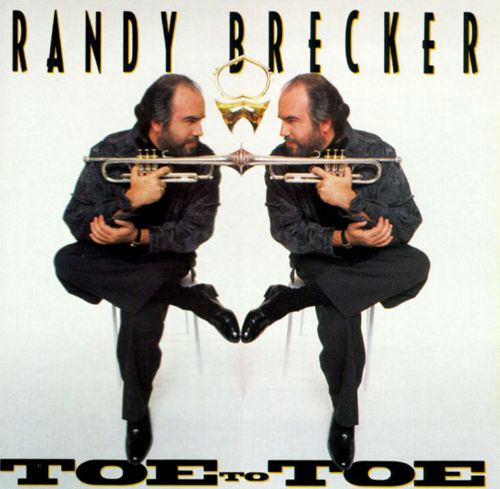 Like others of his generation, Randy Brecker has done his share of hard bop reminiscing (eg the 1986 In The Idiom and the 1988 Live At Sweet Basil), but here he returns to the r’n’b/soul setting in which he made his biggest splash.

When it’s not simply filling time and running funky clichés, Toe To Toe is craftily arranged fusion, with all the sophistication one would expect from the most archi­tectonic half of the Brecker Brothers and all the instrumental brilliance one would expect from one of the most accomplished trumpet soloists to emerge in the 1970s. The arranging delights are especially evident in Mr Skinny and It Creeps Up, both of which make imaginative use of the usual battery of electronic voices and devices to create intriguing rhyth­mic counterpoints. Toe To Toe is not devoid of harmonic banalities, but by and large the typically tense harmonies favoured by the elder Brecker prevent the set from sliding into the mawkishness which gums up the greater pro­portion of soul music.

However, Randy Brecker’s weakness for the popular side of things is not without its hazards. Chief among these is his fondness for a song. This set is discoloured to two vocals (Creeps and What) which suggest he has spent rather too long with his head buried in the Mose Allison/Ben Sidran method of popular singing. On the other hand, neither of these pieces matches the horror of such Brecker Brothers turkeys as Fin­ger Lickin’ Good.

Brecker the soloist is as impec­cable as ever, his vocabulary in the main from the 1950s school, but spiced with signature har­monic colourations. At some points, notably on Mr Skinny and It Creeps, he mimics Miles, as was the fashion of the day in 1989, and recommissions the wah-wah and harmoniser which so distin­guished his work in the Brecker Brothers.

Various: West Meets East – Indian Music And Its Influence On The West

Roger Farbey - 10 October 2020
The number of rock musicians influenced by Indian music is legion. Obviously, The Beatles were prime examples of this. Others in the popular music sphere included the likes of...