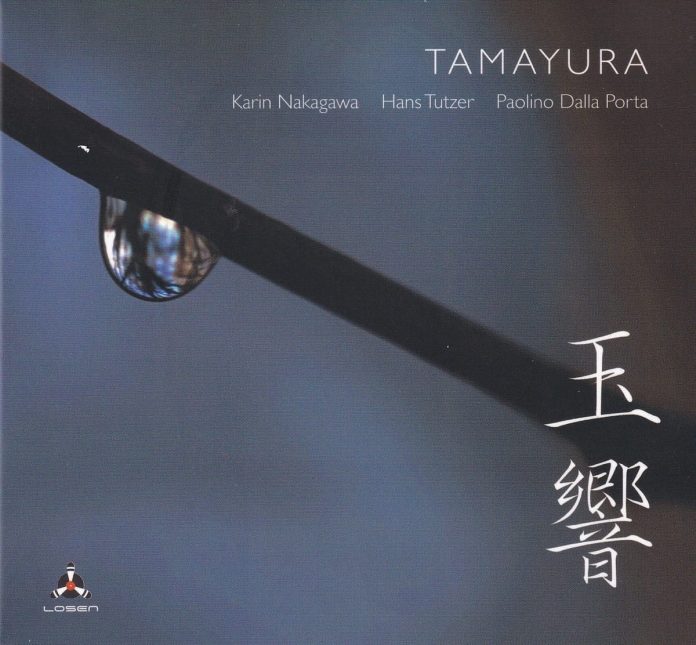 Hard to pigeonhole, this is always interesting music performed with skill by three musicians hailing from different social and ethnic backgrounds and drawn together by their interest in contemporary improvised music. Born in Tokyo, Karin Nagagawa first played piano, then studied koto and singing, later touring internationally. A member of a trio in Sweden, she recorded the award-winning Trees Of Light (ECM Records).

Hans Tutzer was born in Bolzano and studied saxophone in Milan and Innsbruck. In addition to international tours, he also teaches in Italy. For several decades, Paolino Dalla Porta has been an established figure on Italy’s jazz scene, appearing on numerous albums and touring extensively, often accompanying leading jazz artists, and he is a member of Ralph Towner’s Oregon.

The unusual instrumentation allows the musicians to create always interesting sounds. The Japanese koto, a multi-string instrument, plucked like and sounding not unlike a zither, is traditionally a 13-string, sometimes 17-string instrument, but that played by Nagagawa is the much rarer 25-string version. The nyckelharpa, played by guest Marco Ambrosino, is a traditional Swedish instrument, in appearance similar to a large, multi-string violin with side-mounted keys. In standard form the keys allow adjustment of three melody, one drone and 12 resonance strings. Resulting from these instruments is a different and always interesting ensemble sound.

Three of the songs are Nagagawa’s compositions, two by her in collaboration with Tutzer, one by Della Porta, one by Tutzer with Christian Ebnicher, and the album opens with a Japanese folk song. Most of the lyric are by Nagagawa, in some instances taking inspiration from Japanese and Buddhist poetic sources, several hundred years old. Nagagawa’s singing is fluid and attractive, appealing even more to those with the necessary language skills.

Gareth Thomas - 05 April 2021
The third instalment in a series of compilation albums, J Jazz Volume 3 – like its predecessors – is a deep dive exploration into modern jazz in Japan from...