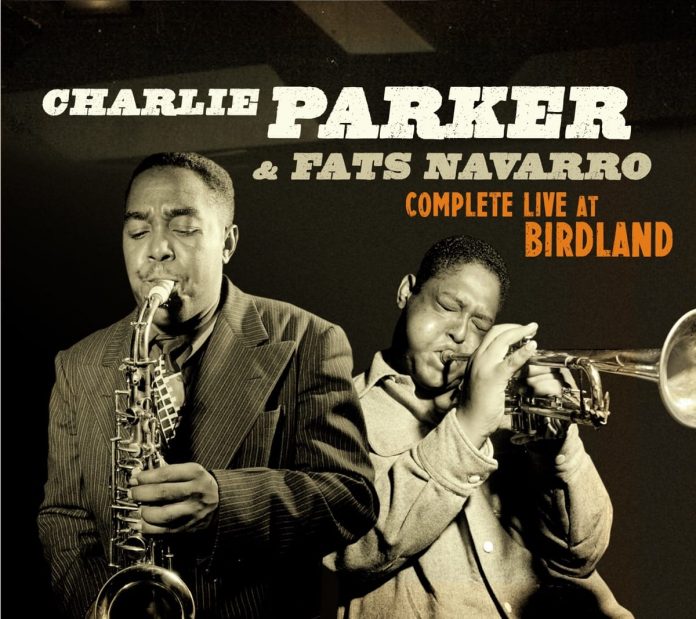 This collection gathers all the music performed by Parker and Navarro at Birdland. The whole of CD1 and the first track of CD2 feature an ideal quintet with Bud Powell and Art Blakey. These ancient tracks have been digitally remastered and, the sleeve-notes claim, have the music at the correct speed for the first time. The tapes still waver slightly occasionally but certainly the first CD has a reasonably balanced sound excepting that Art Blakey is over recorded. Somebody must have moved the microphone too close to the drum kit.

What is soon apparent though is that Navarro was arguably the ideal front line partner for Bird. His invention and ability to improvise at impossible tempi is demonstrated time and again on these tracks. Parker just glides through every selection, adding new melody and harmony to each piece with a clear, rich alto sax tone.

It also shows that Parker in a live situation was far more relaxed, inventive and hard swinging than in the recording studio. Given the poor quality of these selections it is likely he was unaware they were being recorded. Blakey and Powell play up to their best standard and, given the bad balance, it is easy to follow exactly what the drummer is doing all through.

Although Parker rarely played it, there is a first -rate version of ’Round Midnight where Parker’s invention is striking. The Street Beat, Out Of Nowhere and I’ll Remember April are standout tracks. Some of these pieces appeared first in the 1960s on a mysterious label called Le Jazz Cool. This though is, I think, the first time all the Parker/Navarro Birdland tapes have appeared in one two-CD set.

The 2, 3 & 4 tracks have slightly improved sound where front line and rhythm section are better balanced. Roy Haynes on drums is far less aggressive but just as effective with a solid beat on all tracks. Cool Blues has some of Parker’s best solo work with Navarro matching him. Both are superb improvisers who are not fazed by ridiculously fast tempi. Embraceable You has some of Parker’s best ballad solo work but unfortunately this track has a truly awful vocal by someone called “Little” Jimmy Scott. Parker, perhaps in frustration, cuts in on the vocal towards the end with biting phrases played at high volume.

The bonus tracks from 5 to 21 on CD2 are a bit of a mishmash. The person recording the bulk of them suffered from Benedetti syndrome and only recorded Parker’s solos, leaving out contributions from the likes of J.J. Johnson, Red Rodney and Al Haig. The recording quality here is dire. Only the final track is worth listening to, a previously unissued version of Dance Of The Infidels at Birdland with Parker, Charles Mingus, Bud Powell and Art Taylor. CD1 though and track 1 of CD2 have some of the best Parker and Navarro solos ever caught on record. Pity about the sound quality overall. The rating is purely for the music.

Wif Stenger - 15 April 2021
Kansas City saxophonist Richardson can’t be accused of a lack of ambition or confidence. His sprawling fifth album starts off with a spoken-word rap placing him in the lineage...