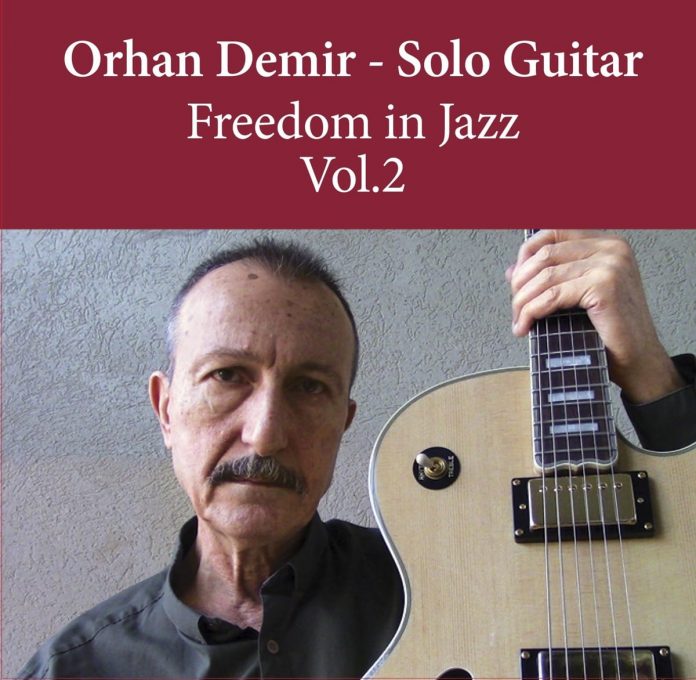 Canadian jazz guitarist Orhan Demir was born in Turkey, 29 September 1954. In 1977 he emigrated from Turkey to Canada. Some of his earliest influences include the principal protagonists of the 1970s jazz-fusion era but later he was influenced by the established pillars of 1950s and 1960s jazz including John Coltrane, Miles Davis, Archie Shepp, Eric Dolphy, Ornette Coleman and Charles Mingus. As a guitarist he was also, understandably, influenced by jazz-guitar supremo Django Reinhardt. Here then, Demir presents his solo follow-up album to its progenitor, Freedom In Jazz (Hittite, 2019).

These 14 pieces effectively take the form of études and might be considered by the casual listener to be meandering or even self-indulgent. However, this would be a serious mistake, entirely missing the point. As clearly implied by the album’s title, Demir embraces the free element fully and executes his art in a flowingly articulate sonic stream of consciousness.

It must be emphasised here that the art of Demir’s improvisation is almost diametrically opposite to the type of free music evinced by Derek Bailey, who in his book Improvisation – Its Nature And Practice In Music (Moorland Publishing, 1980) cryptically describes the vocabulary of his own technique as utilising “non-tonal materials”.

In stark contrast to Bailey’s approach, Demir’s style incorporates both melodic and harmonic phrases where he interposes soaring runs of single notes with chordal colouring, very often in a minor key, with, at times, an almost Iberian sensibility. Check out Stanza and Wish for just two examples of the outstanding elegance of these spontaneous compositions.

It takes a lot of skill to perform solo guitar that manages to maintain simultaneously both a mesmeric and an arresting quality. Whilst there are many great guitarists around, most need or prefer the assistance of a rhythm section. But there are few who can pull-off a collection of fantastic wholly improvised solo performances. Whilst Demir is hardly a jazz household name, he does qualify as an extraordinarily talented jazz guitarist.

Thus, for those prepared to listen, and you really should, this near hour’s worth of stunning improvisation is imbued with intricate adornments and sonic gems. Indeed, these pieces are actually highly listenable and performed with all the skill of an expert and imaginative jazz guitarist. Granted, they’re not in the same stylistic ballpark as more structured solo improvisational sets such as, say, Joe Pass’s Virtuoso (Pablo Records, 1973), but virtuosic they most certainly are.

Leon Nock - 20 August 2019
Were I browsing the easy listening bins in Fopp and stumbled across this album, vocalist and players totally unknown to me, I might well buy it on the strength...