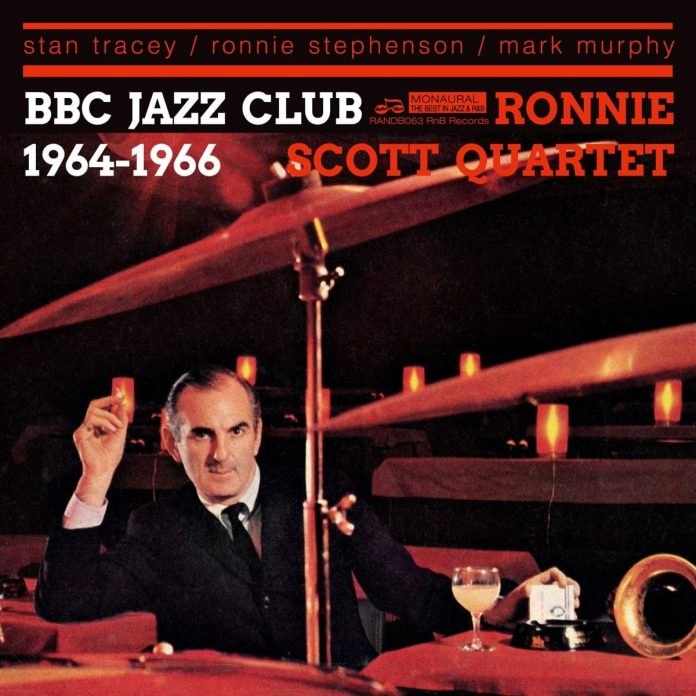 The sessions on this album by the Ronnie Scott Quartet have not been released before. We hear the band at Manchester’s Free Trade Hall where they were supporting Dave Brubeck’s quartet in June 1964. There’s a London studio session in February the following year and another London set when the band accompanied American vocalist Mark Murphy in April 1966. Stan Tracey is Scott’s pianist on all three occasions.

The Manchester performance has Malcolm Cecil on bass and Jackie Dougan on drums. A contemporary reviewer aptly described the set as exciting and full-blooded. The opening number, Close Your Eyes, has blistering piano from Tracey and explosive drumming from Dougan. The latter is equally robust on Avalon. The session is particularly interesting in that you can discern the influences from Hank Mobley’s tenor style, which greatly inspired Scott at the time. He was a fan of Mobley’s and according to John Fordham’s biography, bought his records as soon as they became available in the UK.

The 1965 studio session sees Scott and Tracey with Rick Laird on bass and Ronnie Stephenson on drums. Tracey’s disharmonic interpretation recalls Monk’s idiosyncratic style in Sweet And Lovely and the band delivers a splendid rendition of Arthur Johnston’s Sweet Lotus Blossom. It has a mesmeric walking bass and Scott is absolutely sublime on tenor.

Humphrey Lyttelton comperes the set in 1966 which has Freddy Logan on bass and Bill Eyden on drums. Close Your Eyes receives a step change from the band’s 1964 delivery and we hear an altogether wilder version. Scott doesn’t play on two of the session’s five tracks when Mark Murphy, backed by the band’s rhythm section, takes the stage with Gene Lees’ lyrics to Waltz For Debby and a medley. The Night Is Young follows with Scott in lyrical mode and I’ll Be Seeing You, normally a slow number (think Vera Lynn), is rejuvenated as the band’s closing piece.

Ronnie Scott preferred the spontaneity of live performance to the hassle of making records and he’s rarely been heard better than here – these sessions were recorded at a time when he was at his peak. The sound quality of the album is very good throughout. Simon Spillett sets the scene in a 14-page booklet.

Nigel Jarrett - 02 February 2019
Rolf Kristensen is an associate professor in the wonderfully-named Department of Popular Music at Norway's University of Agder. He's also a fine musician. As guitarist, arranger, zitherist and sound...