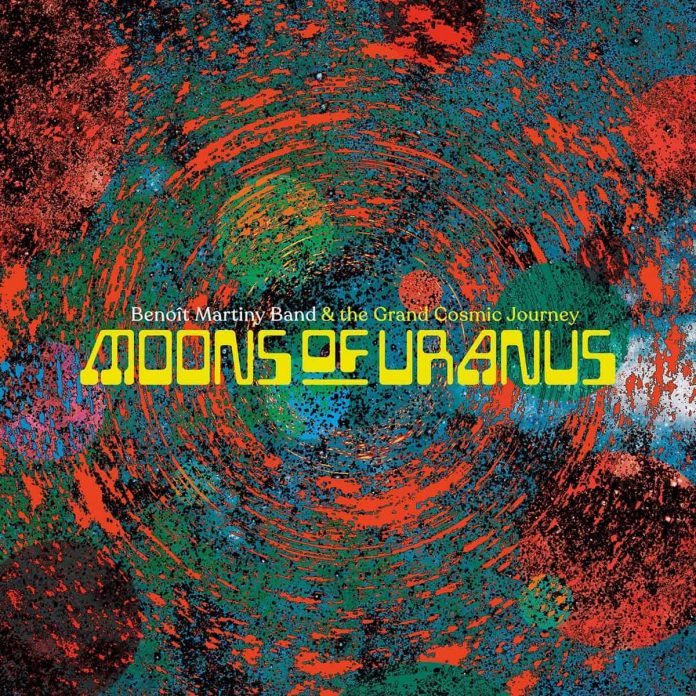 The basic Martiny band consists of van Damme, Driessen, Jonas, Kem and Martiny himself. The other musicians were added for this sixth and latest instalment of the leader’s Grand Cosmic Journey enterprise, inspired by Frank Zappa’s big band projects and Sun Ra’s Orchestra. To my taste there are passages where they surpass their models.

The opening track begins with an ominous rumbling, suggesting the approach of a space vehicle or a solar storm, but when the wave breaks after 30 seconds it manifests as a rollicking, jubilant big-band blues, with a soupçon of reggae sneaked in and even a passage where ZZ Top might comfortably fit. It’s a glorious start to a very enjoyable session. The reggae element comes to the fore at the end of the track, taking us to the Final Frontier, where electronics, percussion and other elusive floating sounds conduct us on board the Space Express. The Express takes a while to achieve much momentum but travels through some voluptuously attractive middle-Eastern territory before it builds to a jazz-rock tinged climax.

Attack begins with an agile, quizzical bass solo, followed by a rather melodic drum solo. I began to think that maybe the track had been mislabelled but a more aggressive mood begins to seep in and, after an agitated bass-clarinet duet with the drums, the nastiness breaks out in the ferocious final minutes of the piece. (My linguistic skills are inadequate to understand Bermes’s manic diatribe in amongst the ensemble lines.)

Stardate 2020 restores some order with a fine bass-clarinet solo, though there is still some edginess. (There may have been more had the musicians known on 2nd March quite what a horrific year 2020 was going to be.) The track closes with a melodious voice-led ensemble after a fine tenor solo. Kaspar’s Dream rests on some more extra-terrestrial tones, maintaining a predominantly nebulous atmosphere shot through with brief, sometimes startling incidents.

The title track revives the mood of the opening piece, again featuring a driving ensemble and rock-influenced guitar plus some exciting reed solos and concludes a consistently interesting and enjoyable programme. The album is dedicated to the memory of the Japanese trumpeter Itaru Oki, who died last August.

Peter Gamble - 21 April 2020
The Lobero Theatre in Santa Barbara is a venue that Lloyd has played more than any other, so how appropriate that he celebrated his 80th birthday by playing a...